If you’ve taken a road trip across America, chances are you’ve stumbled upon a wind farm. Turbines twirl across miles of wide-open spaces where winds are high, creating needed energy in an efficient manner. For many years, the idea of implementing such wind farms was widely criticized and construction was slow, yet the industry remained and has proved to be a valuable source of renewable energy. To date, SWCA has worked on over 950 onshore wind projects and counting.

With the wind industry booming, new technologies have arisen to address the challenges of building wind farms. One challenge is the amount of space needed – and that is where offshore wind farms come in. Offshore is exactly as it sounds: locating wind tribunes in the ocean, rather than on land, to harvest wind energy and create electricity. Offshore wind is widely popular in Europe and is making headway along the Eastern seaboard of the United States. But just like its onshore counterpart in its infancy, there are many factors still unknown.

Whitney Fiore, a Senior NEPA Consultant at SWCA, has worked on many of SWCA’s offshore wind projects. She has more than 20 years of experience in natural resources and is highly skilled in marine and coastal projects, water rights, the National Environmental Policy Act (NEPA), biology, wetland ecology, and regulatory compliance. We asked Whitney about all things offshore wind and where she thinks the industry is heading.

Wire: What are the main differences between onshore and offshore wind?

Fiore: One difference between onshore and offshore wind is how the energy gets from the generation site to the grid. They essentially function the same way mechanically and are interconnected by distribution lines within a wind farm, which must be connected to the grid in order to provide renewable energy where it is needed. However, onshore wind may require the construction of long transmission lines to supply power where energy is needed. Offshore wind is typically located 15 to 35+ miles seaward where no other necessary infrastructure exists. This means that all aspects of getting energy from the wind farm to the onshore grid needs to be constructed in the marine environment.

This leads to the difference between how wind farms are constructed and operated. Because offshore wind is built in a marine environment, in water depths from 90 to 250 feet in the ocean, much of the required work is conducted with marine vessels, including geologic and biologic surveys, construction and maintenance. There must be a nearby port for a landside facility to construct the wind turbines, with navigable depths to handle the vessels bringing fabricated pieces of the wind turbine to the wind farm site for installation. Imagine everything you know about terrestrial construction on any type of infrastructure and move that miles offshore, in a marine environment, with ocean swells and wave action challenges.

Wire: Do the environmental impacts of onshore and offshore wind also differ?

Fiore: Yes. With onshore wind operation, the biggest environmental concern relates to impacting species, namely birds and bats. Because of the distance from land with offshore wind, birds and bats are less frequent visitors. Most, but not all, birds tend to stay closer to the shore even when migrating, and there are no flying insects for bats. However, with offshore wind in America, there are marine mammals and sea turtles, which are both protected and require a great deal of regulatory agency coordination and approvals. Onshore wind can coexist with agricultural activities in many locations. In addition, permitting the onshore cable landfall can be challenging and requires local government approvals and community support. Offshore wind’s biggest challenges are perceived visual impacts and how the commercial fishing industry sees the development of offshore wind as potentially removing fishing grounds and a threat to their livelihood.

Wire: What are the benefits of locating wind turbines offshore? 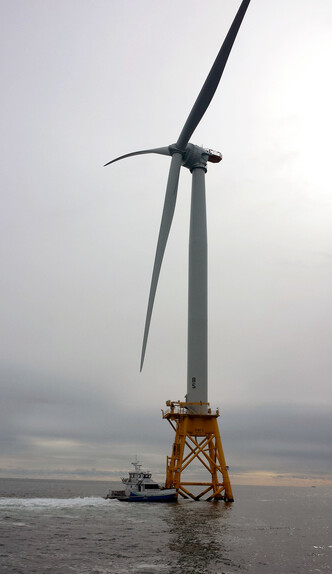 Fiore: Some of the largest population centers in the U.S. are located on the Eastern Seaboard, where there are consistent winds with mean wind speeds of 18-22 mph, which is well suited for wind generation. These reliable wind conditions coupled with the fact that many of the existing coal-fired power plants on the East Coast are being retired means the development of a reliable power source is imperative. Although the construction of an offshore wind farm itself is challenging, there are fewer siting challenges, such as existing infrastructure, topography, urban and suburban neighborhoods and the like, that often create obstacles to onshore development.

Wire: Are there government agencies and regulations that need to be accounted for?

Fiore: Yes. The U.S. Territorial sea extends 200 miles offshore (state waters typically extend 3 miles offshore), and the federal agency that has jurisdiction over activities such as minerals, sand, oil and gas, mining, as well as renewable energy siting, is called the Bureau of Ocean Energy Management (BOEM). BOEM has specific regulations for offshore wind. There are other federal agencies, such as the National Marine Fisheries Service, U.S. Army Corps of Engineers, U.S. Coast Guard, Department of Defense, and the U.S. Environmental Protection Agency, that also have jurisdiction over the marine area, species in the area and/or activities that occur there. Each state also has agencies that must be dealt with, along with many Tribes that also have a seat at the table due to the presence of pre-contact cultural resources in the shallow waters of the Atlantic Outer Continental Shelf (OCS).

Wire: What’s in store for the future of offshore wind?

Fiore: The industry indicates that by 2030 there will be over 20 gigawatts of offshore wind facilities on the Atlantic Outer Continental Shelf (OCS) alone. Currently, there are only 30 megawatts generating offshore, so a lot should happen between now and then. There are also offshore wind opportunities off the coast of California, Oregon, and Hawaii in the Pacific Ocean. The challenges there are different and include water depths often over 1000 feet and fluctuations in wind direction. Floating technologies are currently being developed to work in these types of conditions. Floating technology will not require the same intensity of construction since there are no foundations thus no need for pile driving 250 feet or more into the seabed. Floating technology is the future of offshore wind – at least for now.

Fiore: SWCA has experience with the National Environmental Policy Act (NEPA) and a long history working on NEPA projects, and onshore renewable energy projects, with the Department of Interior, the BOEM’s Cabinet-level overseeing agency, on projects that must comply with Secretarial Order (SO) 3355’s strict page and time limits. In addition, SWCA is expanding on the East Coast, putting strategic staff in the places where offshore wind is being developed so we can be responsive and provide local staff.

Fiore: If you think back 10 to 15 years ago, onshore wind faced many challenges and construction was very slow. That changed very quickly as technologies advanced and power costs came down. I believe we are on a similar trajectory in offshore wind and the dam will soon break, and projects will be approved and constructed very fast.