Eric Munscher, Natural Resources Team Lead out of the Houston office, has been named the Lawrence S. Semo Scientific Achievement Award winner for the third quarter of 2021. 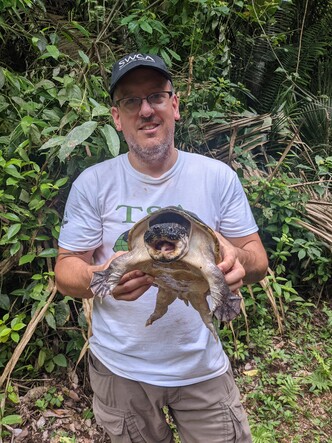 Eric Munscher holds Giant Mexican Musk turtle in BelizeEric has been with SWCA for 14 years. Starting as a field biologist, his roles have included field coordinator, assistant project manager, project manager, and now Natural Resources Team Lead for the Gulf Coast region. In his current role, Eric manages or provides technical assistance on a variety of complex wetland delineation and protected species projects throughout the Gulf Coast Region.

In recent years, Eric has been instrumental in the expansion of SWCA’s capabilities in Endangered Species Act compliance throughout the southeast, including expanding SWCA survey and compliance capabilities for the Houston toad, red-cockaded woodpecker, and gopher tortoise. These services have been instrumental in supporting the Gulf Coast region’s ongoing work on oil and gas pipelines projects as well as the office’s diversification supporting various generation, transmission, and climate drive service projects. In addition, Eric has been heavily involved with the development of turtle population monitoring across the U.S and serves as the director of the Turtle Survival Alliance’s North American research group. Through this research, he has published over 40 research articles and research notes on various freshwater turtle species. Additionally, he serves as a lead chairperson of the Science Leadership Program and is actively involved with Houston’s Gives Back and Spreading the Science efforts.

Recognized as a leader in his field, Eric continually pushes the science forward when it comes to his discipline and area(s) of expertise. The passion he has towards his herpetological interests and work continues to grow opportunities across SWCA. Through Eric’s experience with the alligator snapping turtle, SWCA won a contract to assist the University of Houston with a statewide assessment of the species in Texas.

Eric personifies what it is and what it takes to be a scientist within a consulting firm, from developing, winning, and managing projects, to providing sound scientific solutions in support of those projects. He serves as a technically sound role model for our junior-level technical staff on how to integrate scientific passions into a consulting framework and find success in continuing scientific education.​​​​​