Years of planning a research trip in an understudied part of the world to build the baseline for a decade-long study can create quite the buildup of anticipation for long-awaited answers. 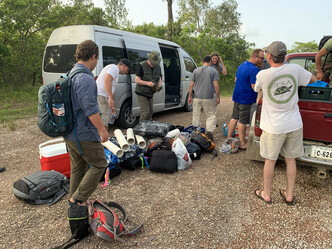 Eric and the team touching down in BelizeA team of SWCA scientists traveled to southern Belize in July 2021 to break ground on the first-ever population survey for turtles in the area.

“I think when Arron and our team planned this two years ago,” SWCA Regional Scientist/Herpetologist Eric Munscher said of his and Natural Resources Project Manager Arron Tuggle’s summer trip, “we had high expectations that we would see lots of turtles and hopefully see most of the species.” 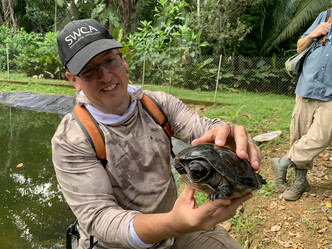 Eric holding juvenile Hicatee, a highly endangered species of turtle in Belize that is bred at BFREE (species not included in study)And the reality?

“When we got down there, I think we were blown away by how many turtles we caught,” Eric said of the study that occurred on a private conservation property in southern Belize. “We got 227 while we were there with another 52 that were caught a few weeks after us…We caught seven of the eight species we were hoping to see.”

Filling in the gaps 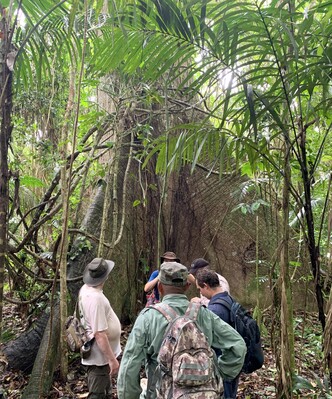 Group on the BFREE property tour looking at Ceiba treeEric and Arron, along with three other scientists participated in the study as a part of an SWCA-sponsored sabbatical for Eric. The nonprofits Turtle Survival Alliance (TSA) and the Belize Foundation for Research and Environmental Education (BFREE) led and funded the study, aided by a private donation. Eric is the director of TSA’s North American research group, and BFREE, which promotes conservation and research, owns 1,153-acres of rainforest in Belize where the team performed the study.

BFREE staff have long been aware of various turtle species on the property, but this study is the first population survey. The catch-mark-and-release work, which lasted 10 days, was the first phase of what will be a 10-year survey. In addition to monitoring the turtle populations annually, researchers plan for annual benchmarking of novel data, including population estimates, annual survivability, sex ratios, and health of the turtles in that area. Prior to this study, turtles in southern Belize had been relatively unstudied.

“No one’s really done work in South Belize before,” Eric said. “So, it’s not that the turtles have never been there before, it’s just no one has looked and documented…It’s a substantial empty area for natural history for a lot of these species.” 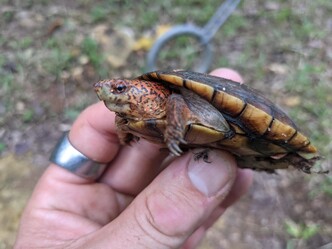 Tabasco mud turtleInformation from the study will provide currently undocumented information to herpetologists, such as confirming—or correcting—suspected ranges of some species. For example, on this first trip, the team found 53 Tabasco mud turtles in an area that proved a roughly 50-mile range extension to where the species was previously known to exist. Relatively little is known about the Tabasco mud turtle, in large because it can be difficult to find.

“It has a different natural history in that with most of these fully aquatic turtles, you catch them in water and they’re easy to trap,” Arron said. “But these, they’re really neat because they only come out after it rains, and you can find them in puddles and these little ephemeral pools. And nobody really knows what they do when those ephemeral pools dry up. Do they go into the leaf litter? Do they burrow down into the substrate?”

The team, though, will have to wait until another leg of the multi-year study to see if it can uncover the answers to those questions. Doing so will require placing trackers on the Tabasco mud turtles, equipment which was not available for this round of the survey, and which will require additional funding, Eric said. That particular turtle is quite small and requires special transmitters that accommodate its size. Placing trackers also requires permitting, he said. 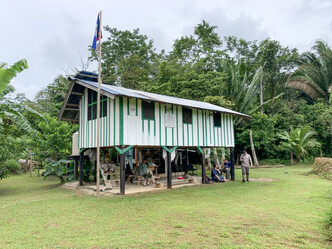 BFREE guard bunkhouse at the very edge of their propertyThe research gathered over time from this study will provide valuable scientific information about turtles in Southern Belize, and this data will also aid conservation efforts in the area, said BFREE Deputy Director Heather Barrett.

BFREE’s land is near the Bladen Nature Reserve plus several national parks and reserves, adding up to about 1.5 million acres of conserved land in addition to the BFREE parcel, she said.

“Over time, our location has proved to be supremely important,” Heather said. Various projects on BFREE’s land piece together a picture of what wildlife lives in the area. And because so many nearby acres are similarly conserved, the group can extrapolate from its research assumptions about surrounding land.

“A lot of the species in the BFREE area also represent what could exist in surrounding areas,” she said. 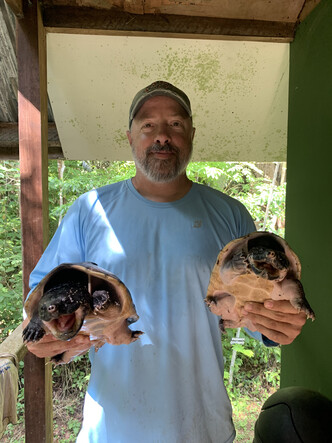 Arron Tuggle holding two Giant Mexican musk turtlesThe southern area of Belize certainly has conserved lands, but development is occurring, making the need to educate on and advocate for the preservation of wildlife habitat an important issue, Heather said.

“Studies like these will help us understand not just what’s on our property,” she said, “but also what’s in the south of Belize and what would be compromised through unsustainable development.”

Development, though, is not the only risk to Belize turtles. While none of the species in the area are classified as protected, turtle advocates are concerned that numbers are dwindling, in part because turtles are a traditional food there, Heather and Eric said. Turtle meat is a traditional meal for Easter, holidays, and other celebrations. BFREE has been working to address the impact that tradition has on turtles, Heather said.

Eric, Arron, and the crew caught as many turtles as possible during their study window in order to provide the most robust population baseline as they could. They marked each turtle found and microchipped the adults. Future study crews will gather information from the chips and compare statistics to gain insight into population growth or decline, ages of turtles, and their apparent health. Seven to eight years of data is necessary to build a solid population model, Eric said.

Replicability is necessary for building any reliable study, Eric said. As part of the study, the group created a protocol for performing future surveys. 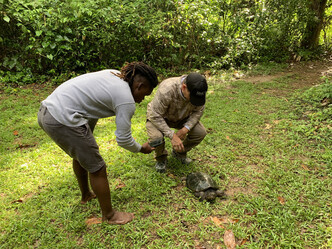 Eric and BFREE Wildlife Fellow/University of Florida graduate student looking at a Meso American snapping turtle“We want people who come down when we’re not down there to follow the exact protocols we do for trapping, for catching, especially for marking the animals, because we want the data to be correct,” Eric said.

The team also noted areas on BFREE’s reserve that are ripe for trapping based on water sources and identified areas for future groups to trek to that this round’s group did not reach. Initial teams of researchers plan to set up several test sites, which future groups will trap at to build comparisons. Some of those next-round spots will require long hikes in with plenty of gear amid Belize’s conditions that feel sticky even on comparatively shorter distance days.

“Eric and I are from Houston; it’s very hot and humid here,” Arron said. “It was a different level of humidity.” 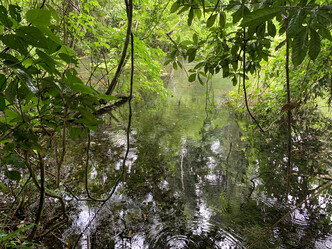 One of the streams where the team trapped for turtles“We were never dry,” Eric laughed. “I thought I knew what humid was.”

The BFREE property includes thick rainforest habitat as well as about 4 miles of Bladen River frontage. TSA and BFREE plan to bring in student researchers to complete future surveys using the standard order of procedure. Planned partner universities include Freed-Hardeman University in Tennessee as well as Peninsula College and Western Washington University, both in Washington.

Looking to the future

Eric plans to return to southern Belize annually and hopes Arron will join upcoming survey rounds. Researchers will use study findings for a range of applications including annual reports to the Belizean fisheries department as well as peer-reviewed publications. 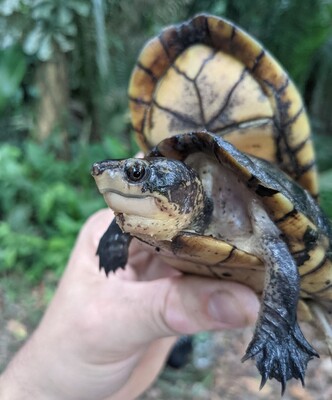 White-lipped mud turtleSome of the papers are on fun things, like our bait choice, while other papers will be “more substantial” and focus on rounding out knowledge about turtles in this part of the world, focusing on species caught, quantity, and species richness.

“Over time, the main goal will be, if we can, to put population estimates on some of these species that don’t have them,” he said.

For instance, some of the turtles, such as the White-lipped mud turtle, are considered fairly common elsewhere in Central America and have large ranges. Yet even those turtles are understudied in that no one has monitored them long enough to produce data that determine what a healthy population size is for the species, Eric said.

Do the population numbers in Belize look to be healthy? According to Eric, it’s too early to tell, but the numbers for some species look promising. Findings to the other end of the spectrum, though, could lead toward further study into whether certain species are at risk.

“It seemed like every day there was something new,” Arron said. “You go check a trap…and you never knew what you were going to get.”

Tabasco mud turtleOver the course of 10 years, the study should produce many answers that are unknown today, perhaps even solving the mystery of all mysteries: where the elusive Tabasco mud turtles go when their puddles disappear.

“It could end up that they literally move two feet and they’re just sitting there in the leaf litter,” Eric said, “but that would be fun in its own way to find out.”