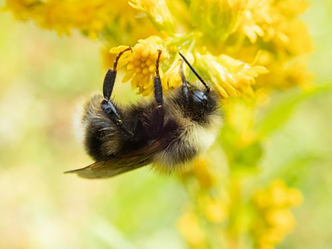 In an absurdist twist, the case hinged on the wording of the State’s Fish and Game Code, which defines a fish as  “…a wild fish, mollusk, crustacean, invertebrate, amphibian, or part, spawn, or ovum of any of those animals.” The Third Appellate District Court of Appeals has ruled that this language includes bumble bees, leading some to conclude that bumble bees are fish.

No matter where you land on this issue, the four bumble bee species have been reinstated to candidate status under CESA, and the State will evaluate whether they should be listed as endangered.

For both CESA and the federal Endangered Species Act (ESA), the status of candidate is an interim step after a species has been petitioned for listing but is not yet listed. For the ESA, species can languish as candidates for years, or even decades, as candidates without protections. In contrast, under CESA candidate species get all the same protections as those that have been listed while the State completes the information-gathering and regulatory steps before deciding whether to list or not. Incidental take permits can be obtained for projects that would impact candidate species, and these may be needed to move projects forward until a final listing determination is made.

In the big picture, this cracks open the door for CESA protections for more insects and terrestrial invertebrates, like monarch butterfly. Considering the recent increase in awareness of declines in pollinator populations, we can expect that more insects will be petitioned for CESA and ESA listing in the coming years.

For these four bumble bees, the State’s information-gathering and analysis may take up to 12 to 18 months. Barring any new surprises, the bumble bees should be out of candidate status by early 2024, whether the outcome is that some or all are listed as CESA endangered species, or some or all are not listed and the formal protections are removed.

Who Will Be Affected?

Users of insecticides where these species occur will likely be affected, along with developers of projects that impact bumble bee habitat. 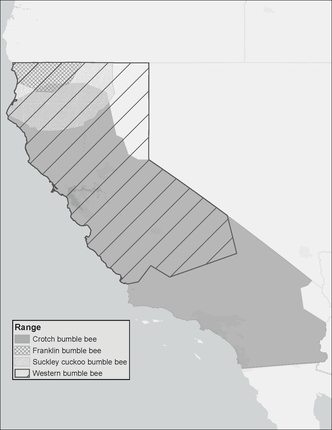 Projects within the species’ ranges should consult with a qualified biologist to determine whether suitable habitat is present, and focused surveys of the project area may be needed. If the bees are present, an application for an incidental take permit may be required.

Where Do These Species Occur?

A map of the known ranges of all four species is seen here. Note that Franklin’s bumble bee has not been observed since 2006 and may already be extinct.

If you have questions or need more information, please contact: