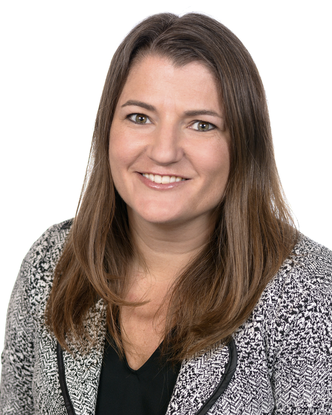 Congratulations to Dr. Heather Gibson, an archaeologist, regional scientist, and cultural and paleontological resources senior director out of our Pasadena office, on being named the Lawrence S. Semo Scientific Achievement Award winner for the third quarter of 2022!

Heather contributes in three primary ways at SWCA: she excels at developing client relationships, leading the execution of some of the largest cultural resources projects in the company, and team building at unheard-of scales. Heather has pursued scientific excellence in history and archaeology in both academic and applied science arenas, acting as technical lead and mentor of many.

As Principal Investigator at SWCA since she joined in 2014, Heather has been the senior author or quality control officer for dozens of planning documents, technical reports, professional symposia, and publications. As director, she leads a high-performing team that undertakes archaeological, paleontological, and architectural history projects across California, which are notable for their breadth and high standards of quality.

Heather’s leadership has built a team that is capable of winning and executing the largest and most complex cultural resources projects by using collaboration as the most important tool in her toolkit.

As principal-in-charge and one of several principal investigators, Heather was a leader on a 300+mile transmission line project in Eastern California that identified over 1,000 archaeological resources. They produced a survey report spanning more than 10,000 pages, which documented one of the largest surveys performed by SWCA in Southern California.

Dr. Gibson’s commitment to achieving client goals is clearly reflected by the results of her projects, and the client feedback she receives. Through the application of the highest standards of quality, her projects routinely breeze through agency review, often drawing praise for their readability and clear adherence to regulatory requirements. 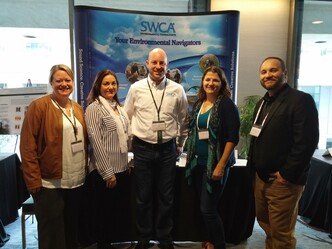 Heather and the SWCA team at a conferenceHeather is responsible for building and managing one of the largest cultural resources teams in the country (at any firm), with a current team size of about 70 professionals, both directly supervised and indirectly managed, located across California and beyond.

Heather’s career has had a strong focus on mentorship, ranging from classroom settings in urban Los Angeles as a member of Teach for America to daily interactions with her project managers, principal investigators, and staff archaeologists. She is focused on the growth of the California Cultural and Paleontological Resources Group and its members’ careers. She has overseen the hiring of more than 150 staff members since joining SWCA in 2014.

Heather’s advice to those following a similar career path is, “Be open to opportunities that present themselves, stay curious, identify your goals and work towards them, and find people that you like to collaborate with, especially in the technical space.”

Heather has a growing body of peer-reviewed publications, many of which derive from her work at SWCA. She has contributed to a number of publications from the groundbreaking study and data recovery project at San Gabriel Mission. Published by a team of experts and part of SWCA’s Anthropological Research Papers series, Abundant Harvests: The Archaeology of Industry and Agriculture at San Gabriel Mission reports on the first archaeological data recovery undertaken at Mission San Gabriel Arcangél during the mission period 1771–1834. She continues to publish data from this study and is co-author of a chapter titled, “A Mourning Dirge Was Sung: Community and Remembrance at Mission San Gabriel,” of the 2018 book, Foraging Communities in Colonial Alta California, published by the University of Arizona Press. Another recent publication is a chapter in the 2019 book The Historical Archaeology of Shadow and Intimate Economies. Her contribution, derived from her dissertation work, is called “Caribbean contradictions: Entangled networks, slavery, and the French West Indies.

We sat down for an interview with Heather to celebrate her award-winning career at SWCA. Watch and listen to what she had to say!