On the northern end of the Hawaiian archipelago, there is a small island with a big problem: mice are eating birds. 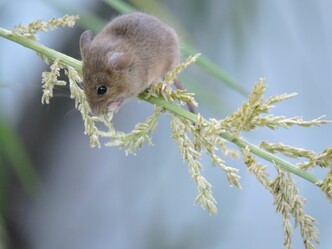 At Midway Atoll National Wildlife Refuge, scientists discovered that the common house mouse (Mus musculus) was eating seabirds alive while they sat on their nests. While some have suggested that the unusual predation was instigated by the starvation of the mice, who started feeding on the seabirds after their foraging habitat, golden crownbeard  (Verbesina encelioides), was eradicated from the island, others have pointed out that the predation was not detected until several years after most of the golden crownbeard had been removed.

Instead, other ecological conditions may be to blame, including changes in the timing of the boom-and-bust cycle of mice populations due to seasonal precipitation fluctuations, resulting in a high number of starving mice at a time when seabirds are steadfastly protecting their eggs.

While the exact cause of the albatross deaths remains unknown, the motivation to protect these birds, as well as hundreds of thousands of other seabirds, native plants, and arthropods, is strong.

Originally brought over during World War II, golden crownbeard – a member of the sunflower family – is the most notorious invasive species on the atoll. The plant creates head-high, impenetrable thickets, which at one point covered 70 percent of Midway Atoll.

Seabird nesting habitats were shrinking in the face of this resistant species. While the birds like shade, the plant created such a dense cover that the birds had difficulty getting to their nesting sites, taking off, and raising their young. Consequently, the yearly population growth had severely diminished.

The plan of action seemed easy: remove the invasive plant and the seabirds would be able to flourish. For years, Friends of the Midway and U.S. Fish and Wildlife Service (USFWS) have been working to eradicate the invasive species, first by mowing and herbicide, and now solely by hand pulling.

Ultimately, the eradication of golden crownbeard was a huge success: seabird populations have since expanded into the open spaces and have eagerly started nesting. However, there are often unpredictable consequences to other species when implementing landscape level changes. 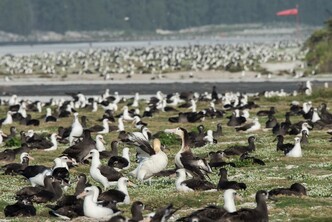 Many seabirds, including those on Midway Atoll, evolved in areas without predators, resulting in a lack of anti-predator response. So, when the mice began eating the birds, they had no defense mechanisms to shield themselves from the attacks.

“It was terrifying when we saw that the mice were eating the albatross alive while they were sitting on their eggs,” says wildlife biologist, James Breeden.

SWCA, in partnership with the USFWS and Island Conservation, is now working to eradicate the common house mouse from the area and mitigate mortality to the local bird populations.

“We knew that the only long-term solution was to eradicate the mice to prevent more damage to the albatross colony,” says Breeden. “The challenge was removing the mice without impacting the non-migratory Laysan duck.”

The Translocation of the Laysan Duck

The Laysan duck is one of the most endangered species in the Northern Hemisphere. Globally, there are fewer than 1,100 Laysan duck both in the wild and captivity. Wild populations of the species can only be found on Laysan Island, Midway Atoll, and Kure Atoll. 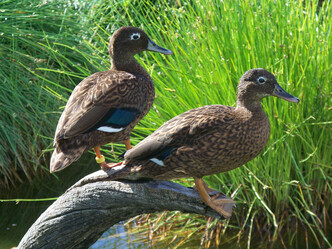 Midway Atoll, home to nearly one half of the known Laysan duck population, is composed of three islands: Sand, Eastern, and Spit. The common house mouse only occurs on Sand Island. The plan is to use a helicopter to apply a toxicant over Sand Island that will eradicate the mice. However, studies have shown that Laysan ducks are also prone to ingesting the toxicant. To reduce non-target impacts to the Laysan duck during the mouse eradication, the team decided to move the ducks approximately one mile to Eastern Island, where the common house mouse does not exist, and the ducks would be safe from the toxicant during and immediately after the bait application.

With help from the USFWS, Breeden and his team developed new techniques to capture and move the ducks. The team pulled heavy inspiration from cattle herding systems as well as funnel trapping techniques that James discovered through some books on old European hunting techniques. Using James’ unique designs, they built special devices to herd the ducks through a tunnel and into a shoot system, allowing them to carefully move the ducks without hurting them.

The ducks were then given a primary feather trim so they could not fly after being translocated to Eastern Island. The mouse eradication also coincides with the Laysan duck’s molt schedule. Once the mice have been eradicated, the ducks will go through their flight feather molt and be able to travel freely among all islands of the atoll.

The team hopes that with the move to Eastern Island, the ducks will thrive, and the mouse-caused deaths will stop, after the bait application process occurs on Sand Island. Preliminary work in 2020 resulted in the translocation of 409 ducks safely. Due to COVID concerns, the project is on hold until 2022. When the eradication project starts up again, the team will move up to 600 ducks to Eastern Island.