Tom Koronkiewicz knows more about golden eagles than most of us know about our closest friends. Take Susan, a golden eagle he captured and fitted with a transmitter on Mother’s Day in 2015.

With various charts, digital models, maps, and spreadsheets displayed on his computer screen, Koronkiewicz can track Susan’s location every 15 minutes, and tell me how fast and how far she travels, and where she likes to eat and sleep. Using elevation changes, he can estimate places she swoops down to ground level to nab her prey. “This fall we’re putting in nest cameras, so we’ll be able to show high-resolution photography of nesting activity too,” he notes.

Susan is just one of dozens of golden eagles that Koronkiewicz studies in his role as an avian ecologist at SWCA. Working with longtime client Babbitt Ranches in northern Arizona, Koronkiewicz and his team have an ambitious goal: Develop a program to not only conserve golden eagles, but track them and increase their numbers to someday help wind energy companies and other developers meet the Fish and Wildlife Service compensatory mitigation requirements and achieve “zero net loss.” “Absent of wind energy, I don’t think we’d know hardly as much as we do about golden eagles,” Koronkiewicz says. “Developers have to go to great lengths to figure out what these birds do and to protect them under the Bald and Golden Eagle Protection Act of 1941.”

Turning a Negative into a Positive 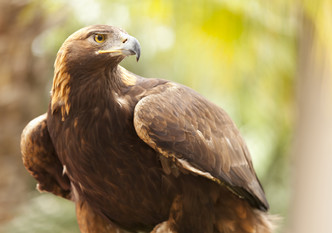 It all began in 2009, when renewable energy was experiencing a significant upswing. Babbitt Ranches was considering leasing part of their land for wind energy, and SWCA was conducting surveys on the ground and from helicopters. The conditions seemed just right. There were transmission lines and ample wind, and the turbines with their small footprint would not interfere with activities on the ranches. There was only one problem, a big one: During surveying, SWCA discovered the proposed site was a nesting area for golden eagles. “I had to get off the helicopter one day and call the client and say ‘you guys are up the creek. There are golden eagle nests on this site,’” recalls Koronkiewicz.

The client and SWCA could have called this a defeat. But Billy Cordasco, President of Babbitt Ranches, had a better idea. “I think there was a sense of deflation a little bit when Tom called, just because we were so geared up to participate in renewable energy, which seemed to be as much the conservation ethic as anything,” he recalls. “But not long after – hours or less, maybe – we started to think, ‘you know what? If those eagles are so important, that’s the value we should go after. We should articulate the conservation opportunities to apply there.’”

Babbitt Ranches, which owns and manages more than 700,000 acres in northern Arizona, operates with multiple bottom lines, Cordasco notes. “We have an accountability to the organization and the economics of the company, but we’re in a land-based business,” he notes, “so our responsibility is also to the environment.” 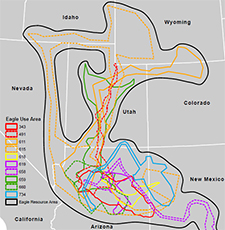 And so began the Babbitt Ranches golden eagle research, monitoring, and conservation project. Traditionally, developers and energy companies that want to mitigate eagle loss have only one option: retrofitting power poles to prevent the electrocution of birds and collisions with lines. But that is difficult, Koronkiewicz notes. In many places developers are running out of poles to retrofit, and often utilities are not willing to retrofit their lines. “We would like to provide a place, a mechanism so that folks who cannot retrofit power poles can go the conservation route.”

SWCA and Babbitt Ranches began looking for new, creative ways to mitigate eagle loss and quantify it. “There are mitigation banks for trees and wetlands – if you use land here, you need to protect land somewhere else. If you cut a tree, you need to plant a new one,” Koronkiewicz explains. “This is very different in that these are animals we are dealing with… At what point do we say, we grew a golden eagle or we precluded the death of an eagle?”

They began looking at all the data and the specific factors that influence golden eagle well-being: habitat, food sources, reducing lead poisoning (eagles are highly susceptible to lead in the environment and in their food sources), mortality, and nesting.

Today, more than a dozen eagles have been tagged with state-of-the-art transmitters that use cellphone towers, which provide more location and spatial data than satellite transmitters. SWCA biologists have been able to track the birds over an area that spans several states. “We estimate a large number of eagle territories across the ranches,” Koronkiewicz says. “That’s indicative of a healthy ecosystem when you consider the arid landscape of the Southwest, where territories are much larger than, say, in lush areas of California or the Pacific Northwest.”

Through their research, the SWCA team discovered that Babbitt Ranches benefits not only the local area nesting population, but those that travel from as far away as Idaho. Subadults and migrating eagles use Babbitt Ranches for stopovers and feeding. “So, by preserving habitats in Arizona, we’re helping eagles elsewhere across the western United States,” Koronkiewicz says.

Meeting the Requirements for Mitigation

By quantifying the potential service area for golden eagle conservation and mitigation banking and the number of birds benefitting from the conservation efforts, the team hopes to provide a mechanism to help developers meet the federal permitting requirements of zero net loss under a revision of the Proposed Rule due out from the FWS in 2016. (The Proposed Rule was established in 2009 to define the mechanism by which developers can get an eagle take permit and how they must mitigate any eagle losses.)

If the SWCA and Babbitt Ranches team is successful, implications will be far-reaching. Alternative energy and other clients will be able to buy credits to offset the impact that their projects may have on golden eagles.

Beyond the potential for mitigation credits, the golden eagle conservation program has yielded valuable data about eagle behavior, food sources, and mortality. The team is collaborating with other scientists who are conducting studies on prey, such as jackrabbits and prairie dogs. They’ve learned more about causes for mortality and how to help eagles survive longer.

Cordasco says it’s all about approaching projects with awareness. “One of the things we defined at Babbitt Ranches is that we’re going to approach our efforts with a sense of learning and understanding first, and not knowing and controlling,” he says. It’s that humility and awareness that makes SWCA a great partner, he says. “SWCA is an integral part of our success in that.”