Yes, monsters do exist, and in the environmental realm they take the form of invasive species.

This is particularly troubling for endangered species. The U.S. Fish and Wildlife Service has estimated that more than 400 of the species currently protected by the Endangered Species Act — and an additional 180 species that are candidates for listing — are impacted in some manner by invasive species.

Invasive species have far-reaching economic consequences as well. The damage they cause — and the management required to repair that damage and stem the tide of invasive species — places an enormous financial burden on city, state, and federal government budgets. A 2012 U.S. Fish and Wildlife Service fact sheet estimated spending of $100 million by the U.S. Department of the Interior just in 2011 on preventing, detecting, managing, and controlling invasive species, as well as on research, outreach, and habitat restoration. That’s truly a monstrous sum. 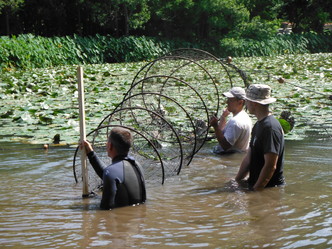 Monsters in the Edwards Aquifer System

The Edwards Aquifer Habitat Conservation Plan (EAHCP) was created in 2012 to mitigate and minimize the effects of activities in the Edwards Aquifer of Central Texas on eight species listed as federally threatened or endangered. The EAHCP set forth a series of ecosystem restoration and management projects in the cities of New Braunfels (where Comal Springs is located) and San Marcos (where San Marcos Springs is located) to protect local endangered species.

One key project, invasive species removal and monitoring, targets non-native species including the vermiculated sailfin catfish, blue tilapia, nutria, and giant ramshorn snail for removal from the Comal Springs ecosystem (Landa Lake). These non-native species are thought to compete for habitat and food with native threatened and endangered species. Additionally, since nutria and sailfin catfish burrow into the sides of river and lake banks when they nest — causing the destabilization of soil, erosion, and an increase in sediments in the waterways — these species are responsible for a substantial amount of the damage observed along Landa Lake’s embankments. Tilapia also dig into subsoil to build their nests, in the process destroying vegetation that is needed by native species for food and cover.

Invasive species have far-reaching economic consequences. The damage they cause — and the management required to repair that damage — places an enormous financial burden on city, state, and federal government budgets.

Since 2013, biologists from SWCA’s Houston, San Antonio, and Pittsburgh offices have performed this invasive species removal for the city of New Braunfels. We remove the invasive fish species using an array of techniques specifically targeting the fish as they conduct certain activities. Gill nets target fish such as tilapia that school in open water, while fyke nets create a barrier to trap fish in a breeding or feeding ground. Trained biologists also use modified hand spears called Hawaiian slings to remove both fish species. We capture nutria by baiting Havahart® traps with fragrant fruits and vegetables such as apples and carrots. Invasive snail removal has largely been restricted to laborious hand capture.

The Results So Far

During the first year of the project in 2013, biologists removed 6,010 pounds of overall biomass from Landa Lake, with another 3,823 pounds removed in 2014.

The decline in numbers from year one to year two — most strikingly, a reduction of nutria from 40 individuals in 2013 to 10 in 2014 — strongly suggests that the removal program has successfully affected the breeding population in the area. Considering that only two nutria removed in 2014 were female, current populations have likely declined below the level necessary to sustain a breeding population. Subsequent trapping during the 2015 removal effort verified these results. Long-term monitoring and ongoing management will be critical to deterring new individuals from neighboring regions from re-establishing a breeding population and damaging the landscape again. 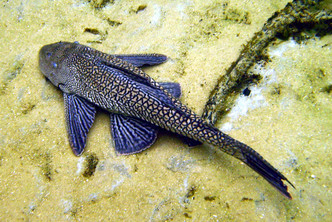 Similarly, SWCA biologists removed tilapia and sailfin catfish in falling numbers from year one to year two. Successful invasive species removal projects that target fish over a long period of time also strive to see decreases in overall length and weight of individuals, which would indicate that the population is losing adult (breeding) individuals and fewer fish are reaching adult size over time. Happily, our efforts have already shown such results. These trends combined lead to the conclusion that with continued removal efforts, the populations may hit a point at which breeding potential fails.

To date, SWCA has removed more than five tons of invasive biomass from Landa Lake. That’s a lot of removed monsters. Of course, such removal often requires drastic measures and many years to accomplish.

Fortunately, Landa Lake is a closed system with no direct overland flow into the lake, making it very difficult for invasive species to recolonize unless facilitated by humans. That makes our job easier. Once we have eradicated — or at least pushed the breeding populations to a low enough level for them to die out — the monsters are likely to be gone for good.