SWCA paleontologist Shawna Johnson did not expect to encounter any large significant fossils during construction monitoring for a Vermilion Energy USA (Vermilion) well pad overlying the Lance Formation in the Powder River Basin of eastern Wyoming. While paleontologists had documented and collected numerous dinosaur and other Late Cretaceous–age fossils from the region since the 19th Century, SWCA’s pre-construction survey of the project area revealed a vegetated landscape with moderate to low relief and no true bedrock exposures. The area had minimal potential for the presence of noteworthy underlying paleontological resources. Or, so they thought.

Vermilion contracted with SWCA to fulfill the Bureau of Land Management’s (BLM) Surface Use Conditions of Approval for paleontological resource mitigation during construction of the well pad in the seemingly endless grasslands of the area. This required Johnson and fellow paleontologist Nate Fox to spend several days walking behind a scraper and road grader, scouring the ground for fossils as operators leveled the area to support the well and other infrastructure. Vermilion had almost finished work when Johnson noticed that the scraper had uncovered three fist-sized bones lying a few feet from each other in a triangular configuration. She and Fox began digging around the find and quickly determined that the three bones were connected. At that point, Johnson realized she and Nate had encountered something big. After more digging she upgraded her size estimation to “massive.”

At that point, Johnson realized she and Nate had encountered something big. After more digging, she upgraded her size estimation to 'massive.'

“Nate and I had a $10 bet,” Johnson says. “I thought it was a pelvis, and he called skull. We weren’t sure until we uncovered the front of the specimen; that’s when it became very apparent that a skull was lying there.”

Curious to learn whether the skull was attached to other bones, Johnson and Fox performed perimeter excavations but found no articulated or directly associated bones. “That’s not unusual,” says Georgia Knauss, SWCA’s paleontology lead and Principal Investigator for the BLM Paleontological Resource Permit. “Finding isolated dinosaur skulls occurs relatively often, thanks to taphonomic process [decay]. Decomposition and other chemical, biological, or physical activity can disarticulate the animal carcasses and scatter the bones.”

Knauss sent photos of the in-situ fossil to Triceratops expert Andrew Farke, Ph.D., of the Raymond M. Alf Museum of Paleontology at The Webb Schools. He confirmed the specimen is a ceratopsian skull. (Ceratopsia is a group of herbivorous, horned dinosaurs that includes Triceratops.) When he heard the news, Wayne King, Vermilion’s U.S. Operations Manager, was amazed. “After being in the industry for over 35 years, I thought I had seen just about everything. As soon as the surprise wore off, I immediately started thinking about steps for removal that would meet BLM regulations and preserve the skull. Shawna and her team were very professional and did things the right way under the pressure of a tight schedule.”

That professionalism included building a rapport with the contractors responsible for constructing the well pad. “Since the operator of the scraper gave us our first glimpses of the skull, we decided to informally name it after his son, Nathan, because he loves dinosaurs,” Johnson says. SWCA’s crew then painstakingly excavated and jacketed Nathan (a process by which the fossil and surrounding sediment is wrapped in plaster like a broken bone to protect it for transport). A backhoe was used to load the 3,400-pound package onto a large trailer for transfer to the Denver Museum of Nature and Science (DMNS). There, under the direction of Chief Preparator Mike Getty, a team meticulously prepared the fossil.

“This specimen is spectacularly preserved, with most of the left side of the face and frill intact, missing only the front of the snout,” says DMNS Curator of Dinosaurs Joseph Sertich, Ph.D. “Since it is from the Lance Formation, it likely represents an older species of Triceratops called T. horridus with a stout nasal horn,” he says. “Triceratops is a relatively common dinosaur in this time period, but any new large adult skulls like this one are very important for understanding the diversity of the species, its relationships to other species, and its place in the latest Cretaceous ecosystem.” Sertich added that while the skull likely will not go on permanent display at the museum, preservation of the fossil is on public display through a glass window of the Schlessman Family Laboratory of Earth Sciences in DMNS’s Prehistoric Journey Exhibit Hall. “And, it may find its way into future exhibits featuring dinosaurs from the American West,” he adds. 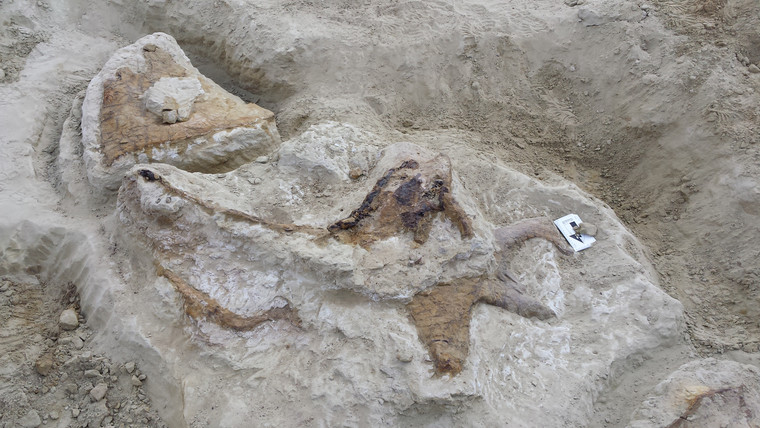 In the meantime, Knauss has been using the discovery as an educational tool as well. She gave a poster presentation on Nathan at the Society of Vertebrate Paleontology’s October 2015 annual meeting, which drew more than 1,000 participants. Her presentation demonstrated the value of implementing best practices for monitoring and mitigation. “We worked hard to excavate the skull carefully in a timely fashion so the client could resume construction as soon as possible,” she says. Even with the discovery and excavation, the team adhered to strict timelines, and the client was pleased.

Together, with Vermilion’s support, SWCA’s handling of the find, the museum’s preparation of and plans for the skull, and Knauss’s presentation, the project also satisfied the BLM’s objectives for paleontological resources, which include fostering public awareness. “We are excited about this discovery and pleased that the DMNS has made the skull’s preparation part of the educational experience for visitors,” says Alice Tratebas, BLM Newcastle Field Office Archaeologist and Paleontological Resource Coordinator. BLM Regional Paleontologist Brent Breithaupt agrees. “This project illustrates the importance of assessing and mitigating possible impacts to paleontological resources from surface-disturbing activities in fossiliferous areas on federal lands. In this case, it is possible that if monitoring had not been done, this important discovery may have been damaged or destroyed by construction activity.”