How SWCA is helping the U.S. Fish and Wildlife Service keep the National Wetlands Inventory up to date

Wetlands morph and shift over time, but one thing remains the same: the need for accurate data about the landscape so that developers and land managers can accommodate the needs of people and nature. Knowing how and where wetlands fit into the landscape makes adequate decision-making and planning possible.

About half of all the original wetlands in the United States have been lost since European settlement. Because 40 to 60 percent of all endangered species have some part of their life cycle connected to a wetland, that loss puts species under additional strain. The existing conditions of a wetland, its habitat values, and species of concern potentially existing there are essential components for understanding how land development, restoration, and mitigation activities might impact those species. 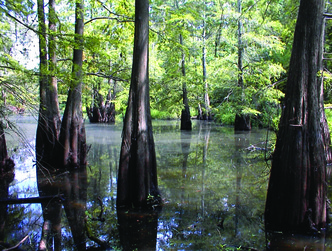 To understand how development will impact wetlands — and vice-versa — first you need to know where they are. In 1986, Congress tasked the U.S. Fish and Wildlife Service (USFWS) with mapping the extent and types of all U.S. wetlands. The National Wetlands Inventory (NWI) mapping serves as one of the largest polygonal GIS datasets in the country. This important national planning dataset must be consulted for siting and approval of numerous federal, state, county, and local agency endeavors, and it serves as a data input for predictive models (sea-level rise, habitat, etc.).

The Importance of Accurate Wetland Data

The NWI has mapped most wetlands in the United States, but not all mapping is current or created with updated mapping standards. Some wetlands in the dataset were last inventoried in the 1970s. While protected areas may still be accurately represented by these data, wetlands in non-protected areas — including those in more desirable development locations — may have changed dramatically in size, location, or other characteristics since they were previously documented.

Current wetland maps can help a developer or resource manager avoid surprises and save on the cost of unexpected additional field surveys and rerouted engineering work. It is more efficient to make management and planning decisions from a database than it is out in the field, after substantial investments in a project have been made.

Who Uses the NWI?

Anyone who works on land development projects — from foresters, wildlife refuge managers, and other federal land managers to non-governmental organizations, private developers, and landowners — can benefit from up-to-date GIS data for their planning purposes. Because the NWI is in the public domain, everyone has access to and can use the data. Current information can make an enormous difference in the planning methodologies of resource managers, energy companies, departments of transportation, and a host of other public and private interests. 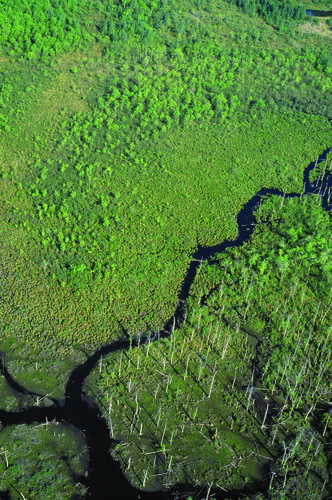 A Work in Progress

Mapping wetlands for the entire continental United States took 35 years. Although this was a major accomplishment, the need for wetland mapping has not ended. The average year represented in the NWI is 1988 for inland wetlands and 1996 for coastal watersheds. Wetlands are dynamic environments that are altered by many factors. Changes in climate, land development, major storm events, and other hydrologic alterations can create, destroy, modify, and relocate wetlands. These changes to wetlands in turn change the obligations placed on landowners, developers, and managers.

The lack of current wetland data that accurately reflect ground conditions is most obvious in the western United States. Ironically, these western states also hold some of the greatest potential for development and conservation. Development decisions must be made based on current conditions onsite, while regulations are often based on conditions that no longer exist but are represented by outdated data. SWCA’s innovative efforts are helping to maintain this work in progress with current, accurate, and timely data at a reasonable cost, thereby reducing the potential conflicts between land managers and regulations.

SWCA’s Involvement in the Inventory

In 2003, several SWCA employees began assisting the USFWS’s Pacific and Pacific Southwest regions as hosted workers to update the NWI for those areas. Since then, the team has mapped wetlands in California, Oregon, Washington, Idaho, Hawaii, Wyoming, Colorado, Utah, Nevada, Arizona, New Mexico, Oklahoma, Texas, and Arkansas. Additionally, the onsite team has been providing GIS and cartography services to the USFWS’s Refuge Information Branch to assist them in their conservation planning efforts and track refuge-related data. SWCA’s experience has led to additional quality assurance and quality control work for the USFWS in Alaska, Maryland, Minnesota, and Montana, and we have worked for the National Standards and Support Team, which develops and applies digital data functions relating to the agency’s wetland maps and habitat data holdings.

Together with the USFWS, we try to prioritize areas that exhibit a lot of change, such as coastal wetlands; areas around urban zones; and locations identified for transmission corridors, renewable energy generation, or oil and gas exploration. In addition, in the last decade we have begun including buffered perennial and ephemeral streams in the NWI. These data were not previously available in the NWI, but they provide additional insights into jurisdictional stream crossings that field crews and planners must consider for respective state and federal due diligence.

Updated rivers, streams, and open water bodies — mapped with modern, high-resolution imagery — reveal many wetlands that were incompletely or inconsistently mapped in older NWI data. In some cases, we can identify wetlands based on a signature of hydrology, vegetation, and soils. However, a dry season or drought conditions may make it impossible to gauge what normal water conditions are. On the flip side, spotting wetlands beneath a forest canopy is more difficult than identifying a bright, vibrant spring on an otherwise dry desert floor. Aerial imagery may help, but such images are usually captured for purposes other than identifying or delineating wetlands. 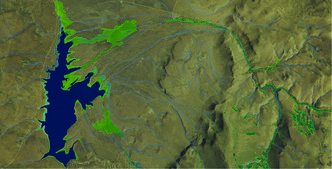 Therefore, we often combine older NWI data with information from other datasets and sources, such as the National Hydrography Dataset, U.S. Geological Survey stream gauge stations, soil and precipitation data, multi-date web-based imagery, user-contributed geo-located photos, LiDAR, remote sensing products, and other ancillary data. We also supplement our desktop efforts with field work, visiting areas where it may be problematic to understand the water, vegetation, and/or soil dynamics.

SWCA has developed innovative and cost-saving approaches to solve GIS challenges. We use partially automated techniques to inform our decision-making and employ tools relevant to the areas in which we work so that we can portray the wetlands accurately and as they exist on the ground. Even with the new technologies at our disposal, however, there is no substitute for staff experience to put all the pieces together. Precise wetland mapping requires a combination of GIS and technological savvy, scientific knowledge of wetlands, sleuthing skills, and knowing when to consult colleagues from the USFWS or SWCA with wetlands expertise in different geographies.