For more than 100 years, the Willamette River waterfront in downtown Portland, Oregon, has been abuzz with marine industrial activity. The Zidell Company started with a massive World War I shipbuilding operation, which later became a World War II effort that delivered 185 ships to the U.S. Navy. In the early 1960s, the company ran America’s largest ship-demolition operation, and present-day operations have seen construction of 243 ocean-going barges, many of them from recycled steel and/or converted liberty ships.

But it is not only a century of marine industrial legacy that marks this centrally located 30-acre site; industrial contaminants left their mark as well. Heavy metals, chemicals, asbestos, and an alphabet soup of toxic compounds were found in the river sediments, on the river bank, and in upland areas. These chemicals were present along with such physical impediments as wire rope, ship ballast, large chunks of concrete, creosote-treated pilings, and buried pieces of ship hulls. 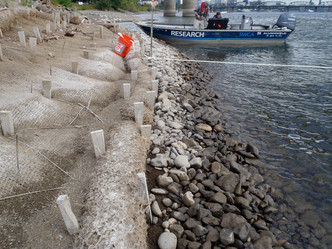 Cleaning up From an Industrial Past

An effort began in 1987 to transform Zidell’s industrial shoreline and “brownfield” into a livable landscape. Based on more than 15 years of comprehensive analysis and a concerted effort to safeguard the public and the environment, the redevelopment project has been one of the most extensive privately funded, voluntary cleanups undertaken on the Willamette River.

Before cleanup could begin, the Oregon Department of Environmental Quality (DEQ) and the federal Environmental Protection Agency determined that the site needed additional investigation because of its history of use.

SWCA’s involvement with the project began in 1996. Fishman Environmental Services (acquired by SWCA in 2004) was selected as the lead consultant of a team contracted to design and implement the rehabilitation of the river bank along Zidell’s 3,000-foot Willamette River frontage, as well as design of the Willamette River Greenway trail running through the property. Over the course of those 17 years, SWCA has provided an array of services in support of the Zidell project:

A biological assessment was of particular importance to the project because two salmon and trout species (Upper Willamette River Chinook and steelhead) present in the Willamette River are listed as threatened under the Endangered Species Act.

Zidell and the DEQ signed a Consent Decree in 2006, which set the stage for the next phases of the redevelopment project. 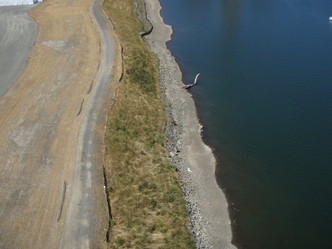 Bringing Nature Back to the River Bank

Early work involved developing a series of design objectives formulated to provide fish and wildlife habitat, public access, and aesthetic benefits to the district in addition to helping the City of Portland restore threatened salmon species in the Willamette River system. Project design considerations gave a nod to the marine industrial history of the site and included the careful treatment of contaminated soils and river sediments.

Although it was not possible to return the site to its historical natural condition, site design solutions sought to re-naturalize the river bank to the greatest extent possible. Such solutions included regrading the bank slopes to make them less steep and reintroducing native vegetation. With these criteria in mind, the design team built soil bioengineering, bank stabilization, and erosion control design into the remediation plan to promote habitat enhancement on the Willamette River.

SWCA is proud to have played a role in this highly complex project involving many regulations, permitting requirements, agencies, and stakeholders… The shoreline is now part of a livable landscape that people — and aquatic life — will be able to appreciate for the next century.

The project was designed to apply as many habitat improvement actions and strategies as possible from the Oregon Department of Fish and Wildlife’s (ODFW) Lower Columbia River Conservation & Recovery Plan for Oregon populations of salmon and steelhead in the Columbia River estuary — of which the lower Willamette River is a part. Habitat improvement and ecological restoration efforts (see bullets below) have contributed to salmon and steelhead conservation.

Preparing the Site for New Uses

Since 2006, SWCA also has been working with the ZRZ Realty Company (part of the Zidell family of companies) and their remediation engineering team to prepare for the eventual transition of the site from industrial use to mixed/commercial use. The SWCA team worked closely with the engineering and legal team to develop a project design and permitting strategy focused on providing beneficial effects to water quality and improvements to shallow water habitat areas.

In addition, SWCA helped remediation engineers with the application for a joint permit from the U.S. Army Corps of Engineers, required under Section 404 of the Clean Water Act. The construction portion of the remediation project began in 2010 and was completed in 2012. Based on strategies set forth in the ODFW's fish conservation and recovery plan, the project has achieved the following ecological improvements:

As part of the formal Endangered Species Act consultation process, the National Marine Fisheries Service prepared a biological opinion, which specified in its terms and conditions that ZRZ create a plan to monitor the composition of gravel substrate placed on top of the sediment cap. SWCA continues to monitor the area to ensure that the gravel surface remains in place over the duration of the permit and provides suitable habitat for the threatened fish species. 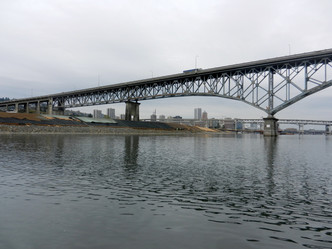 Challenges to the Project

The monitoring plan had to overcome a number of challenges. Among those were physical obstacles to the monitoring work such as the Portland-Milwaukie Light Rail Bridge, which is being constructed within the footprint of the ZRZ project and is scheduled for completion in 2015. Another obstacle was the city’s restoration of the former industrial shoreline to the south as part of the South Waterfront Central District, immediately upstream of the Zidell property.

In addition, the ZRZ project needed to work around the continued operation of Zidell’s barge-building facility. (In fact, Zidell plans to launch their biggest barge ever later this year.) Because the sediment cap that covers the barge launch is subject to potential disturbance from tugboat propeller wash during launches, underwater video surveys in tandem with GPS are being used to detect areas where the cap might be compromised.

Finally, 11 miles of the Portland Harbor in the lower Willamette River were declared a federal Superfund site in 2002. Although the Zidell property is not within the boundaries of the Superfund Program, the actions implemented under the ZRZ project are being watched closely by many of the potential parties, trustees, and regulators who will be responsible for cleanup activities on other sites in the coming years.

The waterfront remediation in downtown Portland is drawing to a close, and the transformation of this century-old brownfield is well under way with the recent construction and completion of a residential project in the upland area. Project planners anticipate a large multi-use development to come next. SWCA is proud to have played a role in this highly complex project involving many regulations, permitting requirements, agencies, and stakeholders. Despite the area’s marine industrial legacy, Zidell’s shoreline is now part of a livable landscape that people — and aquatic life — will be able to appreciate for the next century.