More than century ago in the desert Southwest, a small, grayish-green songbird — the southwestern willow flycatcher (Empidonax traillii extimus) — spent the hottest part ofthe year flitting about in dense streamside thickets, building its nests and rearing its offspring before migrating back to Latin America at summer’s end.

Over time, suitable nesting habitat along waterways shrank as a result of changes in land use and water management, and with it the flycatcher’s populations shrank, too. We’ll come back to the flycatcher, but first let’s examine changes to the land that have taken place over the last century.

Rivers in the desert Southwest were dynamic systems, subject to periodic floods that scoured existing vegetation and promoted the regeneration of willow and cottonwood stands. As rivers were dammed, many streams became channelized and flooded less frequently, if at all. Plants such as willow and cottonwood that depend on flood events for seed dispersal had fewer opportunities to colonize freshly deposited sediments. Native plants also began competing for space with introduced species.

Tamarisk (Tamarix spp., also known as salt cedar), a woody shrub native to Eurasia, was imported to the United States in the early 1800s as an ornamental. It escaped cultivation around the 1870s and also became widely used for wind breaks and erosion control. Tamarisk proved to be particularly adept at stabilizing stream banks because it grows rapidly and spreads easily.

However, tamarisk displaced native vegetation such as cottonwoods and willows in riparian areas throughout the western United States. It forms dense standsoften made up exclusively of tamarisk that support lower biodiversity than do stands of native vegetation. It is also prone to fire, can limit streamside access for recreational users, and was widely believed to use more water than native vegetation, although this claim has been questioned by recent research. For these reasons, many land managers regarded tamarisk as highly undesirable, and removal efforts got under way in the 1960s. Yet it turns out that tamarisk is difficult and expensive to eradicate bymechanical means, and the plant resprouts readily after fire or cutting. So the search began in the 1980s for biocontrol agents for tamarisk.

Tamarisk leaf beetles (Diorhabda spp.), also native to Eurasia, were identified as selective tamarisk feeders, and four species of the beetle were brought to the United States in the 1990s for further study. These four beetle species were collected in varying geographic regions of Eurasia and are adapted to different latitudes and environmental conditions. After nearly a decade of laboratory research, cage releases commenced in 1999, and field releases followed in 2001. Successful releases include one strain of beetle along the Colorado River in Utah in 2004 and along the Virgin River in Utah in 2006. A second beetle species became established along the Pecos River and Rio Grande in Texas in 2009, and two others have become established in the Texas Panhandle.

Adult beetles spend the winter in leaf litter and emerge with warming temperatures in the spring. The adults feed on tamarisk leaves and reproduce. Larval beetles also feed on tamarisk leaves, and when beetles are present in large numbers, virtually every tamarisk plant over dozens of miles of river can be completely defoliated. Once the food supply in an area is exhausted, the next generation of adult beetles disperses, sometimes in large flights, to find green tamarisk.

Tamarisk begins regrowing green leaves almost immediately and can go through multiple defoliation-refoliation cycles as the beetles go through multiple generations before the arrival of fall and winter. The effect of repeated defoliation on tamarisk depends largely on the original condition of the plant, but the general result is reduced foliage volume, death of parts of the plant, and reduced seed production. The reduction in canopy cover allows sunlight to reach the ground,enabling the germination of other plants.

The biocontrol program was never expected or intended to eradicate tamarisk. Rather, the hope was that reuniting tamarisk with one of its natural predators would diminish the competitive advantage that tamarisk has held for so long over native vegetation and allow native plants to become reestablished.

In many regards, the tamarisk beetle has exceeded all expectations. The beetles were originally thought to be weak fliers and disperse less than a mile per year. The explosion of beetles in the Colorado River basin since 2004 has shown that the beetles are capable of dispersing dozens of miles per year. Beetles now inhabit the Upper Colorado River and its tributaries  — the Gunnison, Dolores, Green, Escalante, and San Juan rivers  — as well as the Lower Colorado River from the Grand Canyon to Lake Mohave and several tributaries  —  the Little Colorado, Virgin, and Muddy rivers.

The beetle also has adapted well to new conditions, and the species that colonized the Colorado River can survive at more southerly latitudes than originally thought. Many land managers have greeted the spread of the beetle and the subsequent declines in tamarisk health with enthusiasm, but there has also been growing concern over the effects of defoliation on the wildlife that inhabit tamarisk stands.

The Flycatcher Feels the Pinch 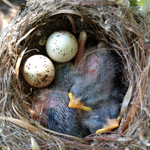 Among the wildlife feeling the effects of defoliated tamarisk is the southwestern willow flycatcher, which was listed as endangered in 1995 under the Endangered Species Act, largely because of habitat modification and loss caused by changes in land use and water management. Prior to the arrival of beetles, flycatchers nested successfully in both native and tamarisk habitats in Arizona, New Mexico, and adjacent portions of neighboring states.

However, beetles caused extensive defoliation in the vicinity of St. George, Utah, beginning in 2008. This was the first time that defoliation and the breeding range of the endangered flycatcher had overlapped. The Utah Division of Wildlife Resources monitors the flycatcher population in St. George, and in 2009, when defoliation occurred in the middle of flycatcher breeding season, the birds had almost complete reproductive failure. Flycatchers rely on dense cover to conceal their nests from predators and as protection from the desert Southwest’s summer heat.

In the following years, the beetles spread downstream, farther into the flycatcher’s breeding range. By 2012 the entire lower Virgin River — where SWCA crews under contract to the Bureau of Reclamation monitor flycatchers — was defoliated. The flycatchers on the lower Virgin River fared no better than those in St. George; a single fledgling was produced in 2013, from an area that has averaged 20 fledglings per year since SWCA began monitoring in 2003.

Flycatchers unsuccessful in producing young are far more likely to move to a different, but nearby, site if they return in a subsequent year. The flycatchers in St. George vacated areas dominated by tamarisk and moved into sites, some of which they had not previously occupied, with substantial native vegetation. Flycatchers on the lower Virgin River face greater challenges, however. Native vegetation is scarce on this reach of the river, and there are no alternative nesting sites available in the vicinity.

Over the long term, the flycatcher may benefit from a shift to native plant-dominated systems. It is the short term — the years in which defoliated tamarisk does not provide suitable shade or concealment but before native plants can become reestablished — that may prove the flycatcher’s undoing. It is a short-lived species; demographic analysis of the flycatcher population monitored by SWCA shows that most do not survive their first winter, and even flycatchers that survive to their second year are detected, on average, for fewer than two breeding seasons. They cannot weather an extended period of poor reproduction without the population plummeting.

The beetle release program was halted in 2010 out of concern for the flycatcher’s fate. But the genie is out of the bottle, and modeling completed at Texas A&M University suggests that the four beetle species will eventually encompass the entire breeding range of the flycatcher. Beetles are converging on the Rio Grande on a large flycatcher population at Elephant Butte Reservoir and are expected to arrive in 2014. One of the largest flycatcher populations occurs along the Gila River in eastern Arizona, where almost all nesting areas are dominated by tamarisk; beetles are projected to arrive there in 2017. 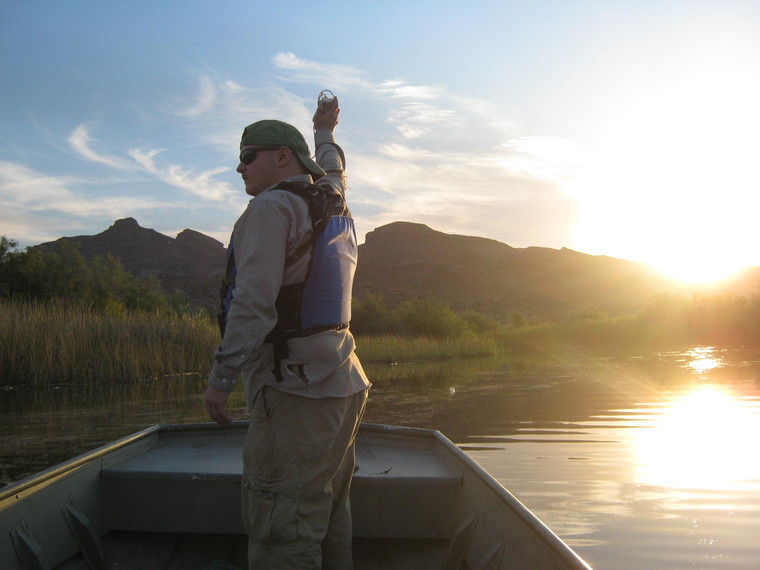 Putting Nature Back in Balance

The evidence from the Virgin River on the effects of defoliation on flycatcher nest success, coupled with the anticipated spread of the beetles, has spurred interest in restoring native vegetation. The Walton Family Foundation, through its Freshwater Initiative, has engaged with local stakeholders in both the Virgin and Gila watersheds to promote strategic restoration planning and establishing native vegetation to benefit the flycatcher.

SWCA crews have been conducting southwestern willow flycatcher studies since 1998, with staff scientists publishing numerous research papers and presenting at professional conferences over the years. Because of this extensive flycatcher expertise on the Virgin and Gila rivers, the Foundation selected SWCA to consult on these planning efforts and serve as a liaison between the Foundation and local watershed groups.

There are many challenges in restoration planning. Careful site selection is required, compliance with the National Environmental Policy Act or the Endangered Species Act may be needed, and funding is almost always in short supply. Despite these obstacles, active restoration in advance of beetle arrival may be the best hope for willow flycatchers along southwestern rivers.