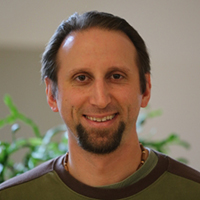 Scott is widely recognized as an expert in the field of ecological restoration. He has developed a series of “soft engineering” techniques and a technical approach that have won the respect of the engineering community and resulted in successful outcomes. Some examples of his work include using cabled logs to stabilize riverbanks in areas that previously would have been stabilized with stone rip rap and developing a wood “scaffolding” to plant steep coastal dunes, a technique for dune restoration that is now widely used.

The quarterly Lawrence S. Semo Scientific Achievement Award rewards individuals for demonstrating passion, creativity, and scientific excellence in a manner that advances SWCA's purpose, mission, vision, and values. The award is in honor of Larry Semo, who began working as a biologist for SWCA in Austin in 1993 and transferred to Denver in 1999. A respected and widely published ornithologist and all-around naturalist, Larry had an insatiable desire to learn and a great love for the outdoors until his untimely passing in 2011.

As a recipient of the quarterly achievement award, Scott becomes a finalist for the annual Steven W. Carothers Scientific Merit Award.