One summer, nearly 3,000 years ago, monsoon rains caused Rillito Creek in Tucson, Ariz., to overflow its banks and swamp a family’s fields at the confluence of the creek and the Santa Cruz River. As the water receded, a layer of sand was deposited, burying the footprints left by nine adults, two children, and a dog. The flood ruined that year’s crop.

We might never have known about this family or the flood. But in 1983, a similar flood removed a bridge over the Santa Cruz River at Sunset Road. And in 2015, in anticipation of the closing of another bridge downstream, Pima County decided to replace the Sunset Road bridge and realign the road across a known prehistoric archaeological site. SWCA was hired to conduct routine archaeological investigations. We learned that nothing about this investigation would be routine. 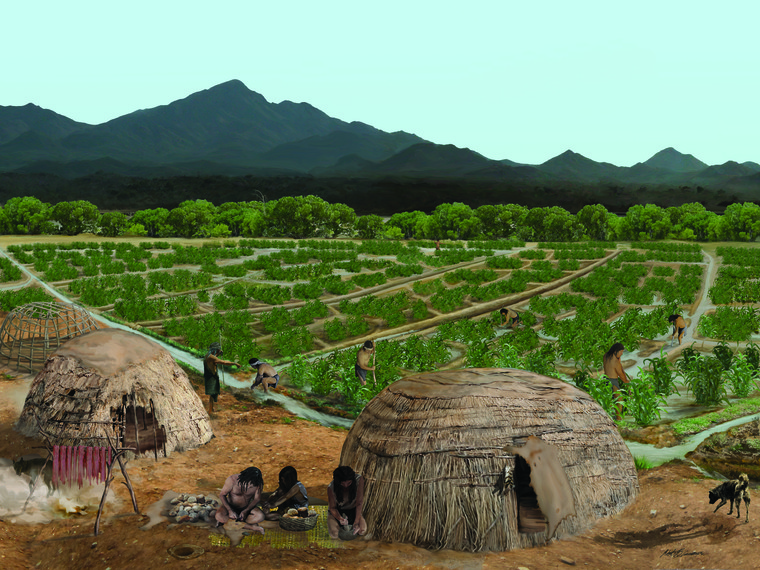 SWCA’s task was to conduct archaeological testing to determine whether archaeological deposits were located below the proposed roadway, and, if so, to conduct data recovery excavations and document a sample of the resources before construction began.

The timeline was critical – construction was slated to begin in March 2016, which meant that all archaeological data recovery had to be complete by December 31, 2015. We began the project on October 1, 2015. As any archaeologist will testify, unanticipated things tend to appear at the end of a project. In this case, on December 9, backhoe operator Dan Arnit, an experienced archaeological excavator, uncovered what appeared to be a human footprint preserved in mud more than one meter below the modern ground surface. He understood right away that this footprint wasn’t recent.

As he used a leaf blower to uncover the surrounding deposits, additional footprints were revealed, extending in trackways across irrigated fields. Ultimately, more than 100 footprints of 7 to 9 individuals—including a toddler, a juvenile, and a dog— were uncovered in 11 garden plots with more than 200 planting pits, alongside three lateral canals leading west into the Santa Cruz River. The nature of the sands deposited in the footprints indicated that the sand was deposited by the Rillito Creek. And, based on geomorphological studies conducted during the testing phase, we estimated that the footprints dated ca. 2,500–3,000 B.P. or around 1,000 B.C. Radiocarbon dating confirmed the ca. 2,500 B.P. date.

Upon discovery of the first footprint, myself as the project’s Principal Investigator and Jerome Hesse, the project director, contacted Pima County. The County quickly understood the significance of the discovery. They also saw an opportunity to invite the public to see why archaeological investigations are an important part of any development that includes subsurface disturbance.

“In the American Southwest, it is rare that a site investigation yields more than an artifact assemblage that the public can recognize – something that looks familiar, something that speaks to them,” says Ian Milliken, Pima County Cultural Resources Project Manager. The scientist in Milliken found the discovery exceptional, he said, because it had the potential to answer a multitude of questions about the history of this area. As a public archaeologist, however, he knew that it was also an opportunity to engage the local community. “It provided a unique opportunity for public values to transcend scientific values, and 2,500-3,000-year-old human footprints were just the ticket.” 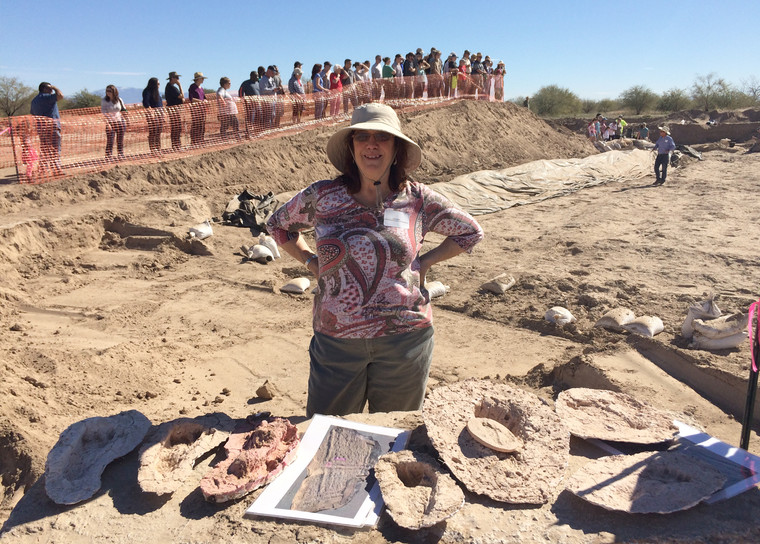 For native tribes in the area, the footprints were a missing piece to a puzzle that had been handed down by elders for generations. When members of the Tohono O’odham Nation visited the exposed trackways, several commented that this was the missing proof of all that they had been told – that their people have lived and farmed this basin for thousands of years.

We proposed a tripartite approach to document, preserve, and provide public interpretation of the find, given its significance not only to the archaeological record, but to the history of the Tucson Basin. SWCA hired a FCC-licensed drone operator to aerially document the area along the river as well as the features within the exposed field. We also contracted an experienced museum preparator, Michael Lee, to make silicone molds and plaster casts of individual prints and several trackways, so that they could be preserved for anticipated future exhibits.

Although SWCA’s official fieldwork concluded on December 31, 2015, the County decided to make use of the intervening 2.5 months before construction to expand the excavation of the footprints as part of a public outreach effort. We assembled a team to assist with these efforts: Doug Gann of Archaeology Southwest captured 3D photogrammetry of the field and footprints as they were exposed; Jon Boyd and Raven One-Five Tactical Consulting and Training provided forensic analysis of the number of individuals involved in the trackways. Volunteers supervised by Archaeology Southwest’s volunteer coordinator, Allen Denoyer, continued to expose the feature during public tours led by SWCA and County staff over three 3-day weekends in January and February 2016. Over 4,000 people attended the tours – many returning more than once.

Before the footprints were covered with sand and road construction began, Tohono O’odham Chairman Edward Manuel, Vice Chairman Verlon Jose, and members of the Nation’s Legislature also toured the fields and conducted a blessing.

SWCA is in the process of completing artifact and sample analyses for the final report. The plaster casts have already been used for the public tours, local class lectures, and a presentation at the Flagstaff Science Fair. Soon they will be traveling to Arizona’s Historic Preservation Conference in Tucson, and they have provided the theme of this year’s Arizona Archaeology and Heritage Awareness Month.

UNITED BY THE FLOODS

Ironically, the flood of 1983 that removed the Sunset Road bridge led to the County’s effort to build another; and it was a flood 3,000 years ago that caused the footprints to be filled with a layer of sand that preserved them in place. Trench profiles tell us that other fields and canals were both above and below this one. Despite the overbank flooding, people returned to this same location and rebuilt their agricultural fields and canals to take advantage of ready water and good soil to grow corn. Their persistence allowed them to survive here for generations.

SWCA’s investigations have also documented that the footprints lead into additional fields to the south of this project, into an adjacent parcel owned by the County. Our investigations allow the County to plan for future development of that parcel, knowing ahead of time that additional significant archaeological resources are likely present. In response to public requests, they can plan a more permanent public interpretation of this window into the past.