The Connecticut is a river that many take for granted. Nationwide, it may not have the notoriety of the Mississippi, the Rio Grande, or the Colorado. But it is the longest river in New England, etching a course more than 400 miles long from the Quebec border south through four U.S. states. Its watershed is vast, and it supplies 70 percent of Long Island Sound’s fresh water. It has more than 1,000 dams on its tributaries and 16 dams on its main stem, a dozen of which are hydropower projects.

So, famous or not, when forces threaten the shorelines of the Connecticut, people take notice.

For the past 20 years, the Amherst office has been engaged in the evaluation, permitting, design, and construction of bank stabilization projects on a 22-mile stretch of riverbank on the Connecticut River. We have worked with landowners, regulatory agencies, municipalities, stakeholder groups, and other entities interested in the ecological restoration of riverbanks.

Gravity, nature, and development can all have an impact on riverbanks. A natural cycle of floods, hurricanes, spring freshets (thaws), ice scour, boating waves, camping, and recreational shoreline use lead to erosion, as do hydrological changes due to development.

In the past, people have tried anything they can think of to stabilize the banks — stone rip rap, concrete bulkheads, old tires, demolition debris, and even junk cars and kitchen appliances. The sheer bulk of these items helps to “harden” the riverbanks, but they also impact the aesthetic and habitat value of the landscape. As we approached the various Connecticut River projects, we imagined a better, more natural way to stabilize the landscape.

Scientific literature suggests that cultures have used living plants to stabilize riverbanks for millennia. However, the practice fell out of popularity in the mid-20th Century, only regaining attention in recent years.

Soft engineering seeks to work with the landscape using natural materials. Some examples include using erosion control fabrics, coconut bio logs (logs engineered from coconut fibers), geolifts, native vegetation, wooden logs, root wads, and, to a much lesser degree, stone. These soft and hybrid bank stabilization projects have proved to be stable, and they have provided the additional benefits of improved aesthetics over stone rip rap. Plus, they also support valuable wildlife habitat. 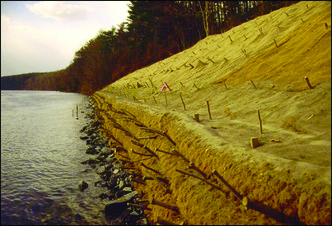 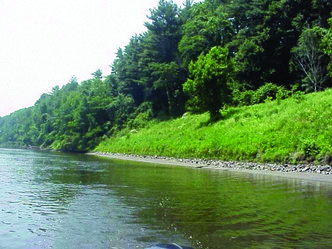 Bank stabilization along this section of river is a challenge because the banks are high (17 feet to 60 feet tall), and these high banks are predominantly composed of fine-grained, sandy soils. Significant flood events, boat wakes, fluctuating water levels, past farming and logging practices, bridge construction, and changes to the watershed over nearly 300 years of settlement have influenced the course of the river and current bank conditions.

In the 1970s, the U.S. Army Corps of Engineers used several configurations of stacked car tires to stabilize more than 1,000 linear feet of eroding shoreline. The introduction of soft engineering (bioengineering) methods in 1995 was a welcome change for those who want to preserve the aesthetics of the river. Yet, while the bioengineering techniques were successful, they relied on a stone toe of slope and erosion control materials and plants on the slope above to stabilize the banks.

In an effort to eliminate the use of stone to provide natural shoreline habitat, we initiated demonstration projects in 2009 to stabilize the eroding shoreline using engineered woody debris. Woody debris log jams were built at a spacing of approximately 120 feet on center and secured into the banks to anchor the planned sediment accretion formations. Native emergent and aquatic vegetation were planted between the log jams to help in the retention of sediment, and to provide wildlife and fisheries habitat. Over a four-year period, more than 5,700 linear feet of shoreline was built using these techniques.

How would we know if the soft engineering methods were successful? We had to look at how much sediment was retained. Staff gages (rulers to measure water elevation) and scour chains (steel chains implanted in the riverbed to measure sediment) were installed vertically along the project’s aquatic bench. To measure bank erosion, bank pins consisting of metal welding rods were installed horizontally into the banks.

During the first year of monitoring, the woody debris structures accumulated more than six inches of new sediment by reducing water velocity along the shoreline during flood events. During Tropical Storm Irene (August, 2011), more than 60 inches of sediment was deposited and retained by the wood structures and vegetation. Since 2009, there has been no measurable bank erosion in over one mile of this river reach.

Engineered woody debris along river shorelines has an added benefit beyond erosion control – it provides habitat for wildlife on the Connecticut River. In the course of our work, we noticed that wildlife use these restored riverbanks more than they did in their pre-construction condition. Each of the constructed projects has a five year postconstruction monitoring element of key habitat features and functions, vegetation, vertical sediment accretion or erosion, horizontal bank stability, wildlife habitat use, and stability.

Through the follow-up and monitoring, we have found that the submerged woody tangles provide important habitat for fish, turtles, and Odonates such as dragonflies and damselflies.

The bank stabilization work conducted on the Connecticut River was the first use of soil bioengineering on a large river system in the U.S. Beyond the erosion and habitat benefits, the restored riverbanks are benefiting all the people who live around and enjoy the river. The use of woody debris to accumulate sediment (versus stone, tires, and junk cars) has been an aesthetic improvement and has garnered praise by the landowners and the boating community. Farmland and forests have been protected.

Best of all, these techniques pioneered on the Connecticut River are beginning to be exported to other large river project sites nationwide.

For more information about our erosion control services, including bioengineering, contact us.