PASADENA, Calif.— In December 2015, SWCA Environmental Consultants published a book on the San Gabriel Mission as the latest offering from our Anthropological Research Papers series. The book, titled Abundant Harvests: The Archaeology of Industry and Agriculture at San Gabriel Mission is now available as an e-book (see links below to download). 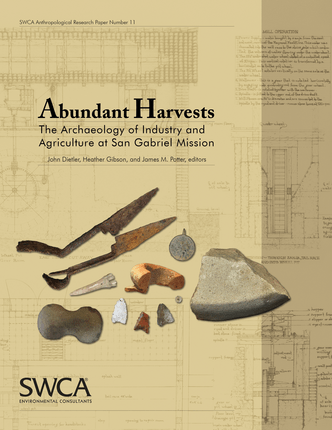 The volume reports on the first archaeological data recovery undertaken at Mission San Gabriel Arcangél, known as the Pride of the Missions due to its legendary agricultural productivity and its prominence in Southern California as a center of commerce and social interaction during the mission period (1771–1834).

Working within the mission’s garden area, the study revealed more than 300,000 artifacts and 45 archaeological features, including a large granary, a reservoir complex, and one of the first industrial properties on the West Coast: Chapman’s Mill and Millrace. Lavishly illustrated and richly detailed, the book is a resource for archaeologists, historians, and mission scholars alike.

The final volume was edited by John Dietler, Heather Gibson, and James M. Potter, and more than 100 SWCA staffers contributed to the study that the book describes.

Hard copies are also available through University of Arizona Press.