The 2017 wildfire season was arguably one of the worst in history for the American West. In California alone, nearly 9,000 wildfires burned 1.2 million acres of land, destroyed more than 10,800 structures, and killed 46 people. Beyond California, there were significant fires in Oregon, Montana, Idaho, Washington, Utah, and Texas. The scope of 2017’s fires drew media attention worldwide, and sparked conversations about wildfire prevention and planning (most of the fires were human-caused).

But what about when the fire is extinguished and the news media go home? For environmental scientists, this is when the hard work begins as we look to bring the ecosystems, cultural resources, wildlife, and affected communities back in balance. Historically (prior to the arrival of Europeans), wildfires burned much of the United States with very few long-lasting adverse impacts to the environment and ecosystem. However, many modern-day fires burn with uncharacteristically high intensity, which can have long lasting effects on the natural and built environment.

The National Interagency Fire Center’s Predictive Outlook for 2018 is forecasting a higher than normal fire potential due to dry conditions, unfavorable weather, and persistent dry fuels. So, as we look ahead, we want to consider not only prevention methods, but also post-fire recovery work. Here, we take a closer look at some of the most prominent impacts of wildfires, and how scientists are working to help ecosystems and communities recover.

IMPACTS: As a fire burns the landscape, it alters the soil and water flows. The fire removes the protective vegetative cover, making the area more vulnerable to severe flooding and erosion. As a result, the impacts following wildfire not only affect communities living in the burned area, but also those living downstream. Through extreme heating, wildfires alter soil properties, in some cases causing soil to repel water, resulting in increased run-off. Increased runoff leads to greater erosion potential, and sediment is carried downstream and deposited in waterways and reservoirs. 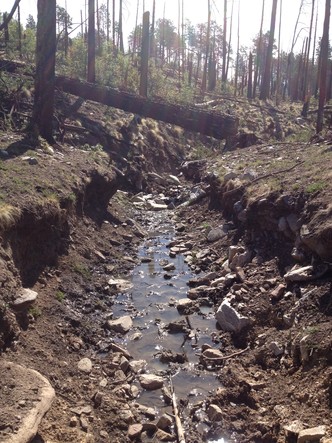 RECOVERY: Some of the methods we use to stabilize soils and restore natural hydrologic functioning following wildfires include targeted mulching, seeding, and planting. These initial methods are often only applied to high severity burn areas and are aimed at establishing surface cover to provide protection to soils. Other methods include contour felling of standing dead trees to reduce soil movement on hill slopes, and grade control structures installed in stream channels to reduce erosion and sediment movement downstream. Lastly, riparian restoration treatments are often done in subsequent years following wildfires to rehabilitate stream channels and reduce the drying out of perennial springs.

SWCA has worked with many communities and land managers on assessing and monitoring post-burn impacts on soils and hydrology. The rehabilitation of soils and hydrology are often a critical first step in the long term restoration of natural resources following fire, and are crucial in preventing damaging post-fire events like flooding and mudslides. Ideally, rehabilitation and restoration occurs as soon as possible post-fire; in some instances, teams will assess post-fire conditions while there is still smoke in the air.

IMPACTS: Wildfires can have a devastating impact to cultural resources. Perishable material such as ancient wood-framed wickiups (Native American huts consisting of an oval frame covered with brushwood or grass) are burned, and even stone tools can be broken apart by the fire’s heat. Fragile faunal remains burn and can be rapidly destroyed from subsequent exposure. Furthermore, as the burned sediment containing buried archaeological remains becomes loose and ashy, archaeological material becomes vulnerable to erosion and exposure. Livestock grazing through these burned sites can significantly churn these deposits. Artifacts exposed by wildfire are notoriously susceptible to uncontrolled collection by looters who are trained to look in burned areas.

RECOVERY: Since 2009, SWCA has provided the U.S. Forest Service, the National Park Service, and other researchers in the mountains of Wyoming with a series of archaeological probability models to support rapid, targeted post-fire inventories of cultural resources in high probability areas. These models have proved to be very useful in focusing these surveys to the most sensitive areas within what can be massive burned areas covering thousands of acres.

SWCA is also working with the National Park Service in the development of Fire Management Plans and accompanying environmental compliance that analyze the impacts of fuel treatment actions and wildfire suppression strategies on natural and cultural resources within multiple National Park properties across the Country. SWCA has worked with numerous historical parks including Jean Lafitte National Historical Park and Preserve in Louisiana, Chickamauga and Chattanooga National Military Park in Georgia and Tennessee, and Salinas Pueblo Missions National Monument in New Mexico. These Fire Management Plans are designed to enhance the protection of the country’s cultural and natural resources from damaging impacts of wildfire.

IMPACTS: In the short term, wildfires can be devastating to some species as a result of injury or direct mortality, or lack of immediate cover and food sources. However, most species have adaptations that enable them to escape or avoid wildfire areas during a burn (for example by fleeing the flames or burrowing underground) and often they return soon after as burn areas recover and provide renewed food sources. The impacts of fire on wildlife are closely tied to the degree of change to their habitats. Many species, particularly in the dry-mesic forests of the western United States, have evolved with wildfire and require it for their long term survival. For these species, periodic disturbance by wildfire is necessary to create habitat diversity and promote food production. However, many ecosystems are burning with uncharacteristic severity and impacting greater numbers of acres; as a result, impacts to wildlife are more pronounced than they would have been historically because wildlife species are not able to find suitable habitat close by to act as a refuge until burned areas can recover.

RECOVERY: When wildlife is adversely impacted by intense wildfire, rehabilitation efforts are necessary. Recovery focuses on stabilization of soils and promotion of vegetation recovery (for example seeding and planting of sapling trees) to improve the potential for native plant community and increase the pace of wildlife habitat recovery. SWCA has worked with federal and state agencies on forest restoration and hazardous fuel reduction projects that analyze the adverse impacts that uncharacteristic wildfire has on wildlife, and the beneficial effects that forest restoration projects typically have on wildlife and their habitat. Our biologists work with agency specialists to recommend mitigating actions to reduce wildfire severity and/or promote the reintroduction of fire to fire-adapted ecosystems through the use of prescribed fire so that when wildfires do occur, they provide needed ecosystem services that promote healthy habitat conditions for a wide range of species. In New Mexico, SWCA is working on environmental compliance in support of Forest Service forest restoration projects to reduce wildfire risk to communities and provide protections for the Mexican Spotted Owl (Strix occidentalis lucida), a federally threatened species.

Wildfires are impacting people and communities with growing frequency. Human populations are increasingly moving into the wildland-urban interface (WUI), and as wildfire frequency and severity increases, the impacts and devastation experienced by WUI populations is also increasing. When a large wildfire occurs in a populated area in the WUI, the social and economic consequences are extensive, complex, and long lasting. In addition to the emotional toll that wildfire destruction can have on a community, there are numerous social and economic challenges that can have long-lasting impacts, including:

In addition, there are the natural disasters that may occur following fires, including catastrophic mudslides that wreak havoc on already vulnerable burned areas.

Humans and wildfires are becoming ever more entwined as we move further into the wildlands. Fires are a natural ecosystem process, and with projected climate change they are forecasted to become even more prevalent across the landscape. Fire managers are recognizing that humans need to learn to live with fire and adapt to its disturbance. How? Many national programs promote creating more resilient landscapes, both natural and human, where humans are able to co-exist with wildfire. Community planning and wildfire prevention activities like community wildfire protection planning, agency fire management plans, and hazardous fuel reduction projects are all helping to mitigate the impacts of severe wildfire on vulnerable communities.

SWCA has been working with numerous local governments, and state and federal agencies to develop plans that address increasing wildfire risk. Our Fire Planners have worked with communities from the Silicon Valley in California to the Pine Barrens of Long Island; these plans are tailored to each unique community through extensive public outreach and collaboration, but all have the common goal to reduce the adverse impacts of wildfire on communities.

For more information about our fire management and post-fire services, contact Vicky Amato at (email hidden; JavaScript is required).