In March 2017, the rusty patched bumble bee (Bombus affinis) made history: it became the first bee species in the continental U.S. to land a spot on the endangered species list. The bumble bee joined seven bee species native to Hawaii already on the list. These seven species – all yellow faced bees added to the list in 2016 – were the first bees to be given protections under the Endangered Species Act (ESA).

The rusty patched bumble bee is native to North America and gets its name because of the small, rust-colored patch found on the workers and male bees. The species once was abundant in the Upper Midwest and Northeast, occupying a variety of habitats, including prairies, wetlands, woodlands, agricultural landscapes, and residential parks and gardens. Additionally, the bees like to nest underground in areas with diverse and abundant patches of flowers.

According to the U.S. Fish and Wildlife Service (USFWS), the rusty patched bumble bee population has declined by 87 percent in the last two decades. Habitat loss, intensive farming and pesticide use, climate change, and disease are among the reasons for the massive decline in the bee’s population over the years. This decline in the species population, and ongoing threats to the species, culminated in the bee being listed as endangered. Currently, the rusty patched bumble bee is likely to be present in just 0.1 percent of its historical range, which stretched from Maine south to Tennessee and west to the Dakotas. Since 2000, there have been documented occurrences of the species in 41 counties across 13 states.

With more than 4,000 species in the U.S. – and nearly 20,000 globally – bees are one of the world’s primary pollinators. Pollinators are in a global decline, with recent reports suggesting that more than 40 percent of pollinators may be facing extinction. Other pollinators that have faced similar challenges as the rusty patched bumble bee include the Dakota skipper (Hesperia dacotae) and the Poweshiek skipperling (Oarisma poweshiek), which have been on the endangered species list since 2014.

LISTED. NOW WHAT?
With its status as “endangered,” the rusty patched bumble bee is afforded full protections under the ESA. This means that USFWS authorization may be needed for activities that are likely to cause adverse effects to the bee or its habitat. Specifically, the ESA prohibits the “take” of listed animals without a federal permit. Take, as defined by the ESA, is “to harass, harm, pursue, hunt, shoot, wound, kill, trap, capture, or collect or attempt to engage in any such contact.” Activities such as pesticide use or disturbance of vegetation in areas where the bees are known to occur might also require USFWS authorization.

Endangered pollinator species are likely to be a consideration for several industries, including transmission, oil and gas, land development, and energy. In reality, any project that might include disturbing vegetation in potentially suitable habitat may at least require coordination with the USFWS. 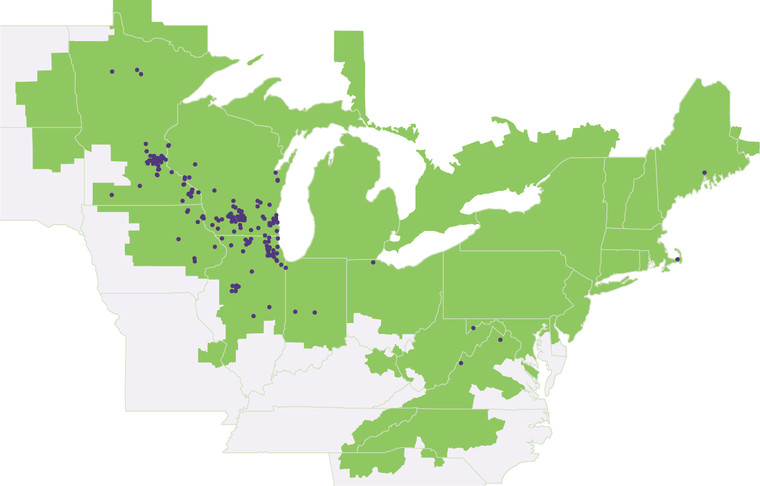 DETERMINING THE NEXT MOVE
When a project falls within the range of the rusty patched bumble bee, it is necessary to determine whether that project will affect the species. A desktop analysis is a logical first step. Using the best geospatial data available, a desktop analysis can determine the likelihood that the species occurs or has the potential to occur in a given area.

SURVEYS, MINIMIZATION, CONSERVATION, AND PERMITTING
Project proponents can gather data specific to their project area by completing rusty patched bumble bee surveys. Surveys must be completed by a federally permitted individual recognized by the USFWS as qualified to survey for and identify the rusty patched bumble bee. Surveys are used to determine if bees still exist at previously documented locations; find and document new bee locations; and monitor known populations. Survey results support project-specific effects analyses and discussions with the USFWS.

When the bee occurs, and is likely to be negatively impacted by project work, opportunities to avoid and minimize effects should be explored. Conservation efforts outlined by the USFWS include restoring and maintaining high quality habitat; carefully planning and implementing land management activities; addressing pesticide use; preventing the release of commercial bumble bees into the wild; minimizing competition from non-native honey bees; and conducting surveys to locate unknown colonies.

In cases where potential effects cannot be avoided, a permit can be obtained from the USFWS to authorize incidental take. The process of obtaining take authorization can be tricky, and can trigger compliance requirements with other federal laws, such as the National Environmental Policy Act.

LOOKING AHEAD
The assessment of project impacts to the rusty patched bumble bee, and other endangered pollinators, will continue to be critical. In fact, there are a number of USFWS listing reviews coming up in the near future for other pollinators, including the Monarch butterfly (Danaus plexippus), the western bumble bee (Bombus occidentalis), and the yellow-banded bumble bee (Bombus terricola). The ranges of these three species cover large areas of the U.S. where oil and gas, energy, and transmission projects proposed in native habitats could be affected.

SWCA tracks the status of these species and is a recognized expert in related impact assessment and permitting issues. We have more than 30 years of combined experience studying and surveying for endangered species in USFWS Region 3, as well as staff federally permitted to survey for the rusty patched bumble bee.