For nearly 20 years, SWCA assisted Pinal County in Arizona with the Kelvin Bridge Replacement Project. In the late 1990s, the county began seeking funding to replace the historic Kelvin Bridge. Located in a rural Sonoran Desert area between State Route 79 in Florence and State Route 177 in Kearny, the Kelvin Bridge crosses the Gila River, one of Arizona’s few perennial rivers, and provides a convenient route between eastern and western portions of Pinal County along the 32-mile Florence-Kelvin Highway.

The Kelvin Bridge Replacement Project aimed to replace the existing structure with a two-lane overpass that would span both the Gila River and the existing ASARCO-Copper Basin Railway. The project included multiple landowners, as well as numerous applicable regulations resulting in multi-agency involvement and approvals.

Kelvin Bridge has a rich history, dating back to 1915, when it was one of two vehicular bridges approved by the Pinal County Board of Supervisors to be constructed along the Florence- Kelvin Highway (known then as Superior-Mammoth Road). Here we take a look at that history, from before any bridge existed through the dedication ceremony of the new structure.

Represented by projectile points and at least one pit that was discovered during excavations.

Hohokam Occupation
The main prehistoric occupation of the area can be attributed to the Hohokam, who lived in central Arizona along the Gila and Salt Rivers. While it is difficult to say how large the site was overall, it was likely a hamlet or small village. Many of the structures were habitation structures, while the others were used for food processing, storage, and perhaps craft manufacturing. The structures were oriented into three rough courtyard groups suggesting that three family groups occupied the project area. The Gila River would have provided water for agriculture and a transportation corridor to and from the larger villages in the Phoenix Basin. Ceramics and shell were brought up from the Basin in exchange for turquoise found locally.

Mining Town of Kelvin
Ray Copper Mines, Ltd. named the mining town for their largest investor, Lord Kelvin, and built a copper processing mill/smelter and constructed a narrow-gauge railroad running from the mine to the mill. The town once boasted offices, a hotel, a post office, staff quarters, and residences.

Copper Basin Railroad is constructed
The historic Phoenix and Eastern mining branch line of the former Southern Pacific Railroad runs along the Gila River just north of Kelvin Bridge. In 1903-1904, the still-line is operated by the Copper Basin Railroad to support copper mining operations at the nearby Ray Mine complex. The railroad was in use until 1911 when the mill was moved to Hayden.

Kelvin Bridge approved
Kelvin Bridge is one of two vehicular bridges approved by the Pinal County Board of Supervisors to be constructed along the Florence-Kelvin Highway, known then as Superior-Mammoth Road. 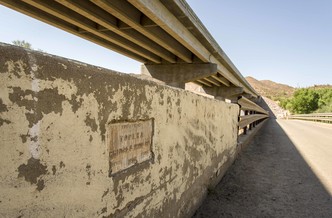 Kelvin Bridge built as part of the Florence-Kelvin Highway
Completed in 1917, the historic Kelvin Bridge was an integral component of Arizona’s transportation network. Located in a rural Sonoran Desert area between State Route 79 in Florence and State Route 177 in Kearny, the bridge crosses the Gila River, one of Arizona’s few perennial rivers, and provided a convenient route between eastern and western portions of Pinal County.

Archaeological Survey
In 2003, SWCA conducted a survey of the project area and recorded Hohokam artifacts and historic features. The site was recommended eligible for the National Register of Historic places and data recovery was implemented. 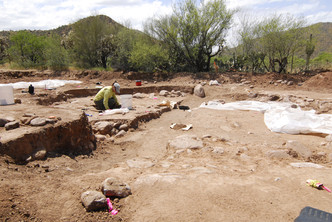 Southwestern Willow Flycatcher & Western Yellow-Billed Cuckoo
Changes to USFWS critical habitat designations for southwestern willow flycatcher and western yellow-billed cuckoo late in project planning required the construction schedule to be modified to suspend work during breeding season. SWCA’s expert biologists worked closely with USFWS, ADOT, and BLM to confine construction restrictions to vegetation clearing activity only, which shortened construction disturbance and allowed for quicker habitat restoration. Biological monitoring confirmed that this approach protected the birds, as the area was again used for breeding even while the construction was in progress.

Historic Bridge becomes part of  Arizona Trail
As part of the Florence-Kelvin Bridge Replacement Project, the existing Kelvin Bridge was left in place to maintain non-motorized access across the Gila River. Today, the historic bridge marks the transition between Passage 15 (Tortilla Mountains) and Passage 16 (Gila River Canyons) of the Arizona National Scenic Trail. For both locals and visitors alike, the historic Kelvin Bridge stands as a testament to the development of statewide vehicular transportation and the post-territorial push to establish what is today, Arizona’s highway system.

Ongoing Restoration Monitoring
So far, monitoring reports have concluded that the restoration is doing well, with an 80% success rate. The last monitoring session will occur in the fall of 2019. If corrective actions are needed, those will be developed and conducted.

Watch our Wire Bonus Video on The Kelvin Bridge Project