What: The U.S. Fish and Wildlife Service (USFWS) has exempted many land use activities affecting the American Burying Beetle (ABB) from regulation under the Endangered Species Act (ESA). This change, consisting of both downlisting the species from endangered to threatened and issuing a “special take rule,” will become effective November 16, 2020.

As of November 16, 2020, only the following non-federal activities affecting the ABB will require authorization from the USFWS: 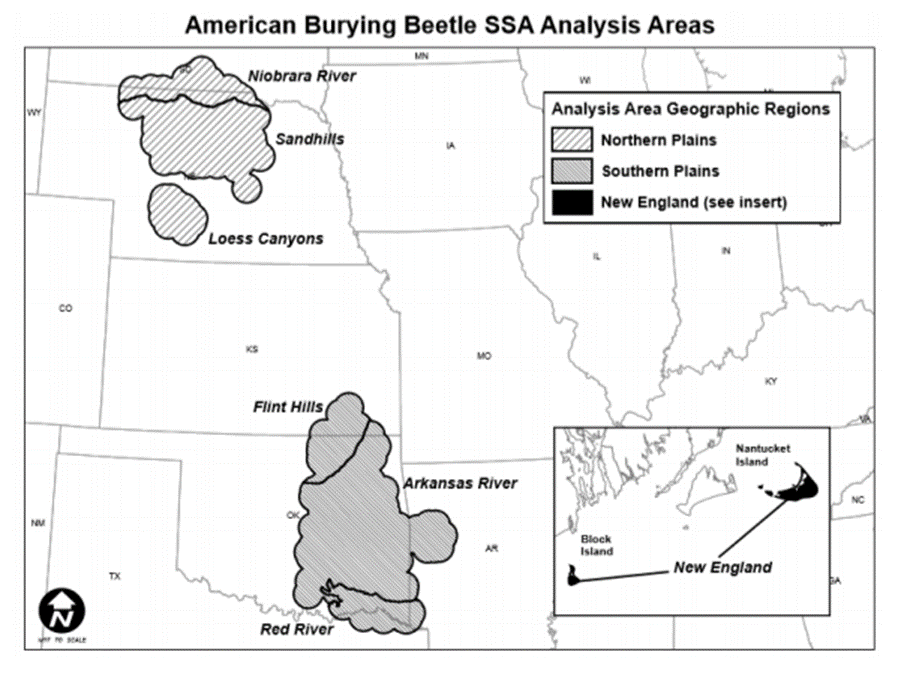 Figure 1 from the ABB Final Rule

Authorization from USFWS will no longer be required for most land use activities that affect the ABB in the Southern Plains. This is a significant change and particularly beneficial for traditional and renewable energy projects and electric transmission facilities. In the New England and Northern Plains Areas, non-soil disturbing activities (like vegetation management and normal livestock ranching and grazing activities) will no longer be subject to the ESA “take” prohibition.

Activities with a federal nexus, such as when crossing federal lands or requiring another type of federal permit or approval, will still trigger the federal interagency consultation process under Section 7 of the ESA.  However, this rule change should substantially streamline these consultations.

Why:  The USFWS determined that the ABB is not currently at risk of extinction. The USFWS found that the ABB range is much larger than believed at the time of listing in 1989 and that there are several large populations with good genetic diversity and a low degree of threat.  The potential future threat of climate change and resulting habitat loss, however, threatens the species with extinction in the foreseeable future.

How:  The USFWS downlisted the ABB based on a review of the best available science and after consideration of scientific peer review and public comment. SWCA, in partnership with other petitioners, spearheaded this regulatory change with a 2015 petition to delist the ABB. The delist petition provided the USFWS a fresh look at the body of science on the ABB in comparison to the regulatory standards established by the ESA in a 2015.

SWCA can help you understand how your activities fit within the framework of this rule change.  We have expert biologists with the permits necessary to assist you with addressing ABB issues that are not exempted.