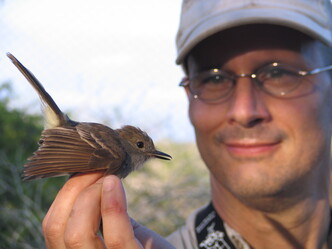 Steve holding a Galapagos flycatcherCongratulations to Steve Johnson, a rare species biologist out of our Amherst office, on being named the Lawrence S. Semo Scientific Achievement Award winner for the first quarter of 2022!

Steve has his dream job: a naturalist studying rare species across New England and nationwide. Earning his Ph.D. in the study of birds, Steve started his career as an ornithologist. But his love of learning quickly propelled him to become an expert in several areas, such as malacology and botany, and to study a variety of species including dragonflies, bats, amphibians, and reptiles.

Steve has conducted rare species-related work for 25 years and has over 15 years of experience conducting underwater surveys and monitoring in both fresh and saltwater habitats. Scuba-certified, he even leads the scientific dive team in the Northeast.

“I totally fell in love with mussels and the treasure hunt that is surveying for mussels,” commented Steve. “On a warm, sunny, summer day, conducting mussel surveys is one of the coolest things I get to do.” 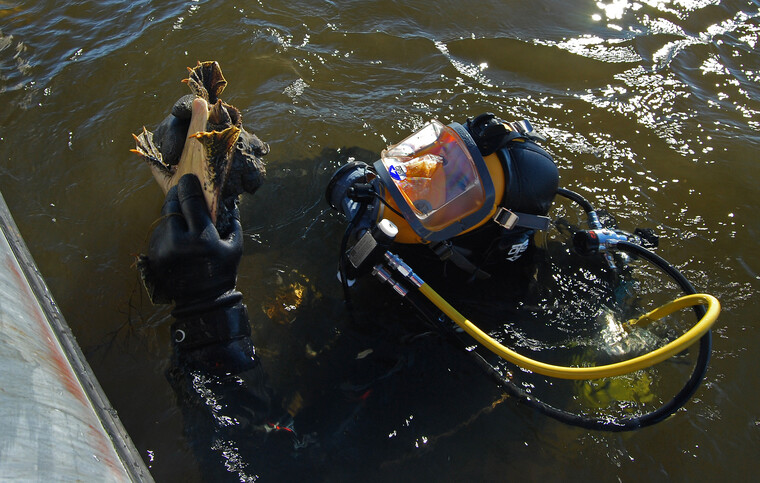 Steve surfacing from a dive with a spiny softshell turtleWhen asked how SWCA’s Science Leadership Program has supported his career, Steve remarked on the support given to develop, submit, and publish a paper in the Urban Naturalist, a peer-reviewed journal that publishes articles focused on all aspects of the natural history sciences as they pertain to urban areas.

“A couple of years ago, we observed an unexpectedly varied assemblage of mussels in Lake Houston, way more diversity than anyone expected, during a big survey project. It’s a finding that you want to share with the world. We completed the paper only this year and I’m positive I wouldn’t have gotten around to the effort of writing it up without the support and encouragement of the Science Leadership Program to take the time to do it. And it’s really rewarding to see our work published.”

Since joining SWCA six years ago as a part of the New England Environmental acquisition, Steve has played an integral role in growing our work with clients because of his commitment to high-quality science and consulting and collaboration across offices.

Click below to watch Scott Fisher and Steve Johnson chat about Steve’s coolest experience so far being a part of a dive team (hint: it involves seeing young-of-year sturgeon in the wild), his approach to “selling the science” and his advice to anyone pursuing a technical track at SWCA.