On December 30, 2022, the U.S. Environmental Protection Agency (EPA) and U.S. Army Corps of Engineers (USACE) announced a final rule that will update the definition of waters of the U.S. (WOTUS) for use in regulations under the Clean Water Act (CWA). This rule is the latest, but certainly not the last, attempt to codify nationwide regulations that define the jurisdictional extent of the CWA. 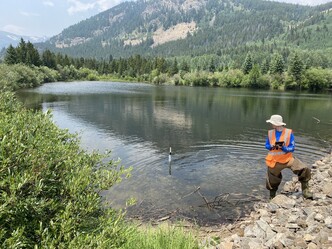 The new rule largely codifies the approach for determining jurisdiction that the agencies have relied on nearly consistently since 2008; the two short-lived exceptions are the Obama-era Clean Water Rule and the Trump-era Navigable Waters Protection Rule. Broadly speaking, the newly finalized rule represents middle ground when compared to the iterations promulgated under the previous two U.S. presidential administrations—the rule extends jurisdiction to many features that were excluded under the Trump-era Navigable Waters Protection Rule and potentially does not include features that were considered jurisdictional under the Obama-era Clean Water Rule.

To summarize some of the most applicable highlights, the agencies’ new rule defines WOTUS as:

A. Features that do not require a site-specific evaluation to be determined to be WOTUS
1. Traditional navigable waters
2. Interstate waters
3. Territorial seas
4. Wetlands adjacent to the features identified in A.1 through A.3
5. Tributaries that are “relatively permanent, standing or continuously flowing,”
i. Including adjacent wetlands that have a continuous surface connection to these tributaries
6. Impoundments of features that are otherwise considered WOTUS

B. Features that are WOTUS if they are found to have a significant nexus to a Traditional navigable Water, interstate water, or territorial sea
1. Non-relatively permanent tributaries, including ephemeral and intermittent waters
2. Wetlands adjacent to but lacking a continuous connection with the features identified in A.5.
3. Wetlands adjacent to the features identified in B.1.

C. Features that are not WOTUS
1. Aquatic resources that were considered non-jurisdictional under the pre-2015 regulations, subject to agency discretion
i. Upland ditches that are not relatively permanent waters
ii. Artificial lakes or ponds created in dry land for such purposes as irrigation, stock watering, settling, or rice growing
iii. Water-filled depressions created incidental to mining or construction activities, provided those activities are ongoing at the time of the determination
iv. Areas that would revert to upland in the absence of irrigation
v. Prior Converted Cropland designated by the Secretary of Agriculture, but only until there is a change of land use from agricultural purposes
vi. Waste treatment facilities
vii. Many stormwater facilities constructed in uplands

Of these five factors, distance and hydrology will receive the greatest weight in the assessing the strength of connectivity and material influence.