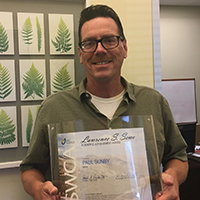 Paul and Larry Semo were birder buddies, and in every sense of the word, true naturalists together. Birds, snakes, snails, mammals large and small, dragonflies, and damselflies – no matter what they studied, they were like kids in a candy shop once outside. They would regularly get up before dawn to hit their golden-cheeked warbler survey sites, do bird counts, spend the afternoon mapping the vegetation on the study site, then drive 5 hours to Corpus Christi to look at a new shorebird.

Paul is in his 27th year with SWCA, and in all of that time he has been the SWCA archetype of scientific excellence in the eyes of our clients and staff.  His work ethic and driving love of the work he does as well as his competence in so many fields of biology and geology has been an example for younger scientists coming into our work force. Paul is an unflinching truth-teller and seeks excellence from himself and others through close observation, careful study, and critical thinking. Thanks Paul for helping make SWCA what we are today.