How do you meet the needs of a rapidly growing human population and the surrounding habitat at the same time? Look to Williamson County in Texas as an example.

Recently, Williamson County in Texas celebrated 10 years of its Regional Habitat Conservation Plan (RHCP). SWCA spent several years working with the County, the U.S. Fish and Wildlife Service (USFWS), and other organizations to create the RHCP, which sought to facilitate development in one of the fastest growing regions in the U.S., while protecting threatened and endangered species.

Williamson County sits just north of Austin, one of the fastest growing cities in the U.S. A decade ago, Williamson County was experiencing (and continues to experience) rapid population growth. As a result, the County was looking to expand its transportation network to improve regional accessibility. Many of the anticipated projects would occur in areas likely to be inhabited by endangered species.

To address the impacts to these species and streamline Endangered Species Act compliance for land development, Williamson County sought a multi-species, programmatic RHCP. After early efforts to create such a plan stalled, Williamson County chose SWCA to complete the RHCP and the accompanying Environmental Impact Statement. This sizeable planning and research effort required coordination with multiple stakeholders and interested parties, including the USFWS and other federal, state, and local regulatory agencies. 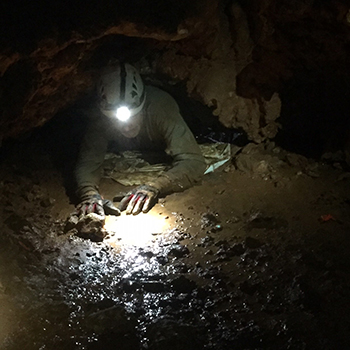 Steve Carothers getting dirty in Cobbs Cavern’s “Wild Side”When the Williamson County RHCP was developed, most other RHCPs were being funded through various mechanisms that often involved exorbitant fees from participants and grants from state or federal government resources. But, Dr. Steven Carothers and SWCA proposed a different idea. SWCA utilized tax benefit financing, which collects 15 percent of the difference in County tax revenues generated when land is improved over its previous state.

In other words, as the land becomes more valuable with the development, the County is able to divert a small portion of the revenue change over the original revenue stream to fund the Williamson County Conservation Foundation (WCCF), which oversees the RHCP. The goal was to purchase many hundreds of acres of pristine land over the 30-year life of the incidental take permit, while accumulating $20 million to fund the perpetual protection of these areas. At the time, this method of funding an RHCP was novel – and opposed by the USFWS. However, SWCA was successful in making a case for this unique approach, and Williamson County received its Section 10(a)(1)(A) incidental take permit in 2008.

Formulating such a successful public-private partnership is not an easy achievement, but it is certainly something to celebrate. The Williamson County RHCP covers incidental take of the golden-cheeked warbler (Setophaga chrysoparia), black-capped vireo (Vireo atricapilla-now delisted), Bone Cave harvestman (Texella reyesi), and the Inner Space Caverns mold beetle (Batrisodes texanus). It also provides research funding for the Georgetown salamander (Eurycea naufragia), which has since been listed as threatened under the Endangered Species Act.

Today, the WCCF protects more caves and land than originally predicted; has permitted significantly fewer impacts to golden-cheeked warbler habitat than predicted; and has permitted significantly fewer impacts to endangered species caves than originally predicted. All of this while also streamlining the ESA permitting process for sustainable development in the area.

A MODEL FOR THE FUTURE

The Williamson County RHCP is now held up as a unique and successful model, which should serve as a guideline for future RHCPs in Texas and throughout the U.S. In fact, the revenue streams are growing so rapidly that the $20 million trust fund for the preserve system is now predicted to be achieved in under 20 years. Williamson County Commissioners are so proud of their RHCP that they plan to host the National Habitat Conservation Plan Coalition annual meeting in 2020. This organization was founded in 2015 and is dedicated to promoting effective use of large-scale RHCP’s across the country, while lobbying lawmakers to recognize the utility of habitat conservation plans as facilitators of both conservation and development.

The Williamson County Conservation Foundation (WCCF) is obligated to spend part of its budget on research that is expected to benefit the species covered under the RHCP. 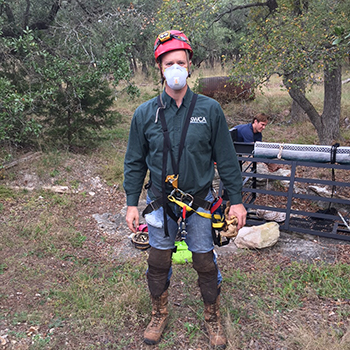 Currently, Dr. Maupin is examining speleothems from Cobbs Cavern – made possible by SWCA biologist Stephen Van Kampen-Lewis, who worked to bring resources protected by WCCF into Dr. Maupin’s laboratory. Speleothems contain rainfall markers, which can be isotopically “read” to determine the climate during their formation. Initial results from the studies indicate that a hotter Texas is a wetter Texas. The cutting-edge research is slated to be published in 2019 and is expected to shape climate research and water budgeting in Texas for decades to come.

SWCA continues to work for the WCCF, logging many hours of biological monitoring for various “birds and bugs” on its preserves, writing annual reports, enrolling RHCP participants, and performing general on-call services as needed to facilitate public outreach and adaptive management.

SWCA staff conduct annual biota surveys in nearly three dozen caves and have made significant scientific discoveries during the past 10 years. In fact, in 2017 surveyors discovered a blind mold beetle (Batrisodes reyesi) in the Beck Preserve. Of this new find, James Reddell, Texas’ premier authority on karst biology, said that it was “amazing that this [species] was not found in the last fifty years, as this is one of the most intensely studied areas in Texas.”